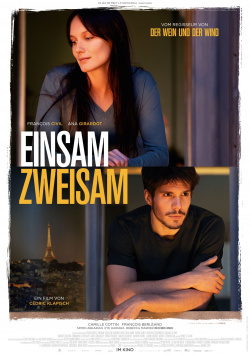 R&eacute;my (Fran&ccedil;ois Civil) and M&eacute;lanie (Ana Girardot) are both 30 years old, single and living in Paris just steps away from each other. They long for the same things, but always take paths that lead them not to each other, but always just past each other, on the way to their supposed destination. While M&eacute;lanie wanders from one disappointing date to the next in search of true love, R&eacute;my just won't succeed in getting a date at all. His extreme nervousness and occasional panic attacks don't really help. More and more, the two seem to lose themselves in the loneliness of big city life, unaware that happiness lives virtually next door.

If French director C&eacute;dric Klapisch is good at anything, it's capturing the feeling of life of people in the big city. He did that just as well in L'Auberge espagnole and its two sequels as he did in So Is Paris. Now, in Einsam Zweisam, he sends two singles in Paris on a damn difficult search for the meaning of life, which they hope to find in the very great love. Fran&ccedil;ois Civil and Ana Girardot, the main actors from Klapisch's last film The Wine and the Wind play their roles very authentically - both in the very quiet, as well as in humorous or slightly more dramatic moments.

Not much really happens in the almost two hours. The viewer follows the two lonely souls through their everyday lives, riding with them on the metro through Paris, going shopping with them in a small supermarket on the corner or listening to them during sessions with their therapists. Now this isn't exactly great event cinema, but it still works really well. Because somehow, despite a certain amount of overacting, the characters in the film seem real and you root for them when they are once again on the verge of their paths crossing, whether or not their eyes will finally meet and sparks will fly.

Though it would have been so easy to turn the material into a light romantic comedy. But he's chosen a different path, one that, despite a certain slowness and uneventfulness, entertains well and somehow hits the heart too. Like his main characters, the whole film is just very charming. Fans of light French entertainment fare can happily let themselves drift through Paris with this story. Worth seeing!