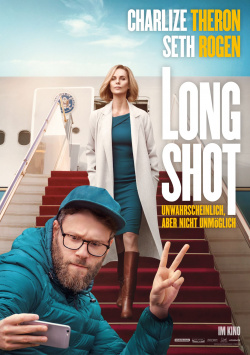 Long Shot - Unlikely, but not impossible

When she learns that the incumbent U.S. President (Bob Odenkirk) is not running for re-election in order to pursue his career as a movie star, respected Secretary of State Charlotte Field (Charlize Theron) sees her chance coming: She wants to become the first woman in the White House. In herself, the politician is well-liked and respected, but her speeches are not her greatest strength. Therefore, Charlotte desperately needs a new speechwriter. When she meets the slightly chaotic journalist Fred Flarsky (Seth Rogen) at an event, whose babysitter she once was, she hires him without further ado for her campaign. Although the two couldn't be more different, they grow closer and closer. But can things end well when a nerd falls in love with the future US president?

Long Shot - Unlikely, but not impossible is a really well done romantic comedy. Granted, some scenes are unnecessarily crude, but apparently that's just part of the genre these days. But even if director Jonathan Levine digs in the lower humor drawer here and there, he always manages very well to counteract this with a lot of charm and clever dialogue wit. The film skilfully avoids any kitschy cliff and thus comes across as pleasantly fresh. Sure, the whole thing still remains quite predictable until the end. But the way to the inevitable happy ending eludes the usual genre clichés and works just thereby really well.

Now, of course, there will be some people who will say: A woman like Charlize Theron falling for a guy like Seth Rogen is completely unrealistic. That may be so at first glance - if you only get hung up on appearances. But the script does a great job of establishing why Charlotte is attracted to Fred, which is also believably conveyed to the screen by the great chemistry between Theron and Rogen. True to the German subtitle, this relationship is unlikely, but not impossible. And besides: It is a cinema film, a modern fairy tale - there may also be a little dreaming.

In addition to the romantic aspects, the film does not spare satirical side blows on US politics. Bob Odenkirk (Better call Saul) shines here as a completely incompetent US president who has his roots in show business and would much rather return there after one term. Any similarities to actual people are, of course, purely coincidental. But it's not just the president who gets his due here. Other politicians and the media are also made fun of in an often insidious way.

Although it doesn't always work, the entertainment value of this charming romantic comedy is consistently on a very high level, even if it is a little too long at over two hours. For those who like it romantic, but also like a little bit rougher, Long Shot - Unlikely, but not impossible can really be highly recommended. Absolutely worth seeing!

Cinema trailer for the movie "Long Shot - Unlikely, but not impossible (USA 2019)"
Loading the player ...