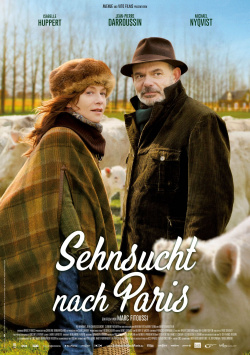 Life no longer holds many surprises for cattle farmers Brigitte (Isabelle Huppert) and Xavier (Jean-Pierre Darroussin). Since the children have left home, an unexciting routine has taken hold of the couple's everyday life. They seem to take it for granted that their passion has also faded a little. But when Brigitte meets young Stan (Pio Marmai) from Paris at a party in the house next door, and a flirtation develops between the two of them, it awakens long-forgotten longings in her. Spontaneously she decides to travel to Paris for two days under a pretext to meet Stan again. Although the meeting doesn't go as planned, the secret trip of self-discovery turns into a tingling adventure when Brigitte meets Danish businessman Jesper (Michael Nyqvist), whose charm she quickly succumbs to. What she doesn't suspect is that Xavier has long been on to her and has followed her to Paris.

The desire to break out of the daily grind, to experience new passions and simply to feel desired again, these are themes often used in books and films, as many readers and viewers feel addressed by them. For many feel trapped in their personal daily routine and enjoy it when they can at least give free rein to their imagination while reading or watching a film. Longing for Paris hits exactly this note, but doesn't manage to gain any new facets from the topic. Marc Fitoussi has directed a very unagitated, charming film that doesn't really hurt anyone and will surely please lovers of light French cinema fare. At the same time, however, he has missed the chance to give the story a depth that would have been more in keeping with the talents of his excellent cast.

So Isabelle Huppert and Jean-Pierre Darroussin sell themselves short, as does Michael Nyqvist, known from the Stieg Larsson film adaptations. They all deliver more than solid performances, no question. But somehow you constantly get the feeling that they are thwarted again and again by the script, which is rather lacking in surprises. Especially in the second half of the film, this results in the actors and the characters they portray being upstaged by the beautiful shots of the city of love. As a promotional film for Paris, this is excellent, but for a feature film, it's just not enough.

What the film does have to be given credit for, however, is that Longing for Paris never tries to be more than it ends up being. Sure, potential for more would have been there. But that only plays a minor role in the very relaxed, unexciting production. Marc Fitoussi primarily wants to offer light entertainment that tells a nice story in beautiful pictures and that many viewers can relate to. And since he has succeeded in the bottom line well, there is especially for lovers of light art house entertainment from France despite the aforementioned weaknesses at the end still a satisfied: worth seeing!

Cinema trailer for the movie "Longing for Paris (Frankreich 2014)"
Loading the player ...