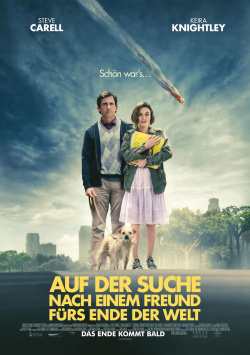 Looking for a friend for the end of the world

It's five minutes to twelve. The end of the world is unstoppable. An asteroid over 100 kilometers in diameter is hurtling towards the planet, and even the last attempt to destroy it or divert it from its deadly trajectory has failed. Humanity has only a few days left, then they and their entire habitat will be destroyed forever. For insurance salesman Dodge (Steve Carell), the end begins with this news, which his wife uses to flee without another word. Now he faces the apocalypse all alone and ponders his life, missed opportunities and wasted years. That's when a letter his chaotic neighbor Penny (Keira Knightley) has had lying around her apartment for weeks comes in handy. The letter is from his high school girlfriend Olivia, the love of his life. From the looks of it, Dodge has a chance to at least spend the last days of his life happily with someone he loves. To get to Olivia, he convinces Penny to drive him there in her car. In return, he would arrange for her to join her family in England. And so the mismatched pair embark on a very special road trip that reveals a whole new side of life, friendship and love to them in the face of impending doom...

With her directorial debut In Search of a Friend for the End of the World, screenwriter Lorene Scafaria (Nick & Norah - Soundtrack of a Night) delivers a highly entertaining but also moving look at the end of the world. It completely eschews the familiar disaster scenarios and instead reveals a much more intimate look at a global event. Lars von Trier already did this in Melacholia, but there the threat was omnipresent and visible through the ever-expanding planet. In Scafaria, there is also a certain doomsday mood, but it is neither as depressive as it was in Lars von Trier, nor is it in any way tangible. The asteroid is only visible in news broadcasts, otherwise the protagonists operate in an inherently normal world where only the humans exhibit completely abnormal behavior.

The problem the film has to contend with is the fact that Scafaria relies more on whimsical wit at the beginning of the film, making the audience laugh in occasionally quite macabre ways. The appearance of CSI veteran William Petersen, for instance, is just great and really mind-blowingly funny in a very black humorous way at the end. Also when Diane (Connie Britton), a friend of Dodge's wife, tries to set up the end-time single at a party first with the somewhat overdressed Karen (Melanie Lynskey, Two and a Half Men), who in view of the end of the world just wears all the nice things she still has in her closet to the party at once, only to make a pass at him herself, it makes for really funny moments in its own way.

The first half of the film in particular is filled with wry comedy and original humour of a slightly more morbid kind. But the closer it gets to the actual end, the more melancholic and emotional the whole thing becomes. And by the end, some viewers might even shed a few tears of emotion - depending on how amenable you are to emotions of this kind (it worked for me!). And with this discrepancy between humor and drama, between bitter wit and light kitsch, many just can't get comfortable with it.

Whoever succeeds will be rewarded with a very special tragicomedy, which proves once again that Steve Carell is at his best when he acts in a very restrained way and that Keira Knightley as a completely crazed free spirit doesn't come across as overly annoying, as one must still fear at the beginning, but is extremely charming. A very nice film, which shows that you only have to be afraid of the end of the world if you have to face it alone. But that's actually generally true. So you don't have to wait for the apocalypse, just find a friend for the next cinema visit already! Worth seeing!!

Cinema trailer for the movie "Looking for a friend for the end of the world (USA 2012)"
Loading the player ...