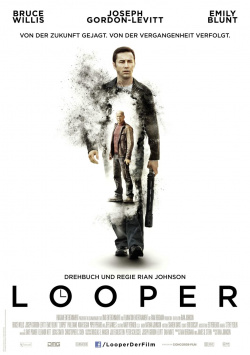 Rian Johnson has only two feature films in his repertoire. But his debut feature Brick in particular was so surprising, intelligent and unconventional that it was clear then that great things could still be expected from this director. And Johnson now more than lives up to those expectations with his cleverly constructed, thrillingly directed and visually superbly realized science fiction action drama Looper.

The film is set in a not-too-distant future in which a black market for time travel exists. These are used by ruthless crime syndicates to make bodies disappear without a trace. The victims are unceremoniously sent back 30 years into the past by so-called loops, where hitmen are waiting for them, who then take care of the execution and disposal of the corpses. They perform this job as loopers until their loop is closed and their future selves are sent ahead of them. Then they know they have thirty years left to enjoy with a tidy severance package. Joe (Joseph Gordon-Levitt) is among the best of these hit men, known for getting the job done quickly, consciencelessly and with absolute precision. As more and more loops are closed in the future, Joe's days as a hunter are also numbered. But when his 30-year-old self (Bruce Willis) appears before him, Joe hesitates for the first time before pulling the trigger on his gun - a mistake that will have far-reaching consequences for more than just his life...

Removed from the pressures of major studios, Rian Johnson has directed Looper, first-rate science fiction cinema for the mind and the eye. The script quickly proves to be a carefully crafted thriller, where every detail seems to have a very specific job to do, resulting in a coherent and inherently logical overall picture at the end. In contrast, Johnson demands full attention from the viewer, which this film also deserves. Only those who follow the events closely and do not completely switch off their mind will be able to enjoy the genius of this film to the fullest.

Naturally, there are many passionate genre fans who do not want to do just that when visiting the cinema. They want to switch off completely and just let the images and the action take over. That's fine in itself, but such viewers run the risk of overlooking important details and connections in Looper, which could make the film seem overloaded and contrived in some crucial moments. Also, there's a pretty clear break in style in the second half, where the action pauses completely and only serves the character development. Again, this has unfortunately become a real rarity for contemporary mainstream cinema, which is why some viewers might criticise this.

But it is to be hoped that these critics will remain in the minority, and that as many lovers of that particular sci-fi film as possible will recognise and appreciate the effort and heart and soul that Johnson has put into this film. Because everything is just right here: in addition to the great script, the fascinating design that skillfully mixes contemporary with futuristic, and the sometimes very drastically staged action, the actors also deliver great performances. Joseph Gordon-Levitt, in particular, perfectly manages to make a character that is actually abysmally dark and bad accessible in a way that allows the audience to sympathize with his fate and wish him a better future. As a result, the film is able to make significant gains in terms of tension, dramaturgy, and effectiveness of the finale.

But the rest of the cast, whether it's Bruce Willis, Emily Blunt, a wonderful Jeff Daniels, or Noah Segan, who has appeared in Johnson's previous two films, also fit perfectly into the proceedings. Of course, despite all the care taken, Rian Johnson also pushes the limits of logic here and there, which the theme of time travel actually inevitably brings with it. But Johnson has found the only correct way to deal with this problem by getting it out of the way with a single sentence that Bruce Willis gets to throw at his younger self in a conversation. This is as amusing as it is ingenious, as any accusation of a lack of logic is thus debunked.

Those who associate great entertainment cinema only with 3D glasses and senseless action (which, of course, can be a lot of fun) will find it hard to be captivated by the world drawn in Looper. But if you like things not quite so slick at times, if you want to be pampered not only by the eyes but also by the intellect, and if you still enjoy genuine originality, then you definitely shouldn't miss one of the best films of 2012. Definitely worth seeing!!!!