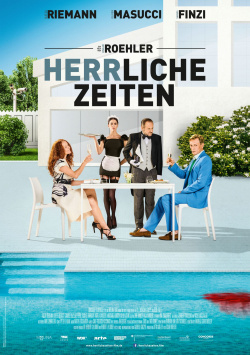 Actually, the plastic surgeon Claus (Oliver Masucci) and his wife, the garden architect Evi (Katja Riemann) were just looking for a new domestic help for their chic villa. Claus, slightly intoxicated, places an ad with the headline Slave/in wanted, which initially results in all kinds of interested people in patent leather and leather showing up at the couple's door. But one of them seems to have taken the ad seriously. The attentive, educated and well-groomed Bartos (Samuel Finzi) would like to serve Claus and Evi as his master and mistress. The two are initially extremely uncomfortable with being waited on from end to end. But Bartos enriches their lives immensely. When he also brings in his wife Lana (Lize Feryn) to assist, the mansion turns into paradise on earth - just too good to be true.

Oskar Roehler (Elementarteilchen, Agnes und seine Brüder) is a filmmaker who likes to polarize. His films are sometimes a bit special, which can also be said about the bitter satire HERRliche Zeiten. The film goes down a few paths that will make some viewers stop laughing, especially when the humor comes around the corner a bit more hidden. But in the end you have to give Roehler credit for one thing: he tells his story very consistently to the end. And there one forgives the film also some somewhat weaker or even platter, exaggerated moments gladly.

Skillfully, Roehler allows his characters to succumb to the temptations of the life of luxury and to accept the exploitation and humiliation of other people in return. The moral doubts that may arise for the protagonists in the process are wiped away in a way that seems somewhat manipulative on the one hand, but is entirely understandable. Even as a viewer, one catches oneself envying Claus and Evi having a slave like Bartos, and at some point one inevitably asks oneself: what would I be willing to do for such a life?

The boundaries of good taste are quite deliberately crossed at one moment in particular. What this leads to is surprisingly consistently realized and makes for a bitterly nasty ending that leaves viewers not knowing whether to laugh or shudder with moral horror. With an enigmatic staging and a deliberately striking play of the very good actors HERRliche Zeiten leaves a somewhat uneasy feeling - but also a very positive overall impression. And for that there is clearly a: Absolutely worth seeing!