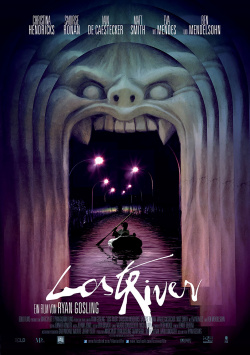 The days when Lost River was a thriving city are long gone. Now run-down houses and spooky skyscraper canyons dominate the cityscape. Those who have the opportunity move away; few residents make it in these dreary surroundings. Billy (Christina Hendricks) has managed well so far to provide a sheltered life for her two sons, Franky and Bones (Iain De Caestecker), even in this difficult environment. But now the debts are crushing and she is in danger of losing her home to the bank. But then new bank manager Dave (Ben Mendelsohn) makes her a lucrative job offer, but it could bring unexpected dangers for the single mother. At the same time, Bones is trying to scrape together enough money with copper scrap to fix his car. In the process, he finds himself targeted by Bully (Matt Smith), the self-appointed ruler of Lost River. Bones quickly realizes that Billy and his gang are not to be trifled with. But like his mother, he is not willing to give up his dream of a better future - even when it puts himself and those around him in grave danger...

With Lost River, Ryan Gosling tries his hand at directing for the first time, though here he lacks the creative versatility he has so far demonstrated on several occasions as an actor. For his directorial debut, he has drawn far too obvious inspiration from his dual collaboration with Nicolas Winding Refn. Color scheme, narrative structure, imagery, music - all are strongly reminiscent of Only God Forgives and Drive, spiced up with a dash of David Lynch. There are also elements of the critics' favorite Beasts of the southern wild. To be inspired by other works is in principle no reason for criticism. But when hardly own ideas are recognizable and some aspects seem to be directly cribbed, then it's just hard to let real enthusiasm arise.

No question, Lost River has some fascinating moments. The Detroit locations and Benoît Debie's camerawork make for a gripping, at times almost hypnotic atmosphere that's hard to resist. And the actors are also convincing in their own right. Especially Doctor Who star Matt Smith as the brutal Bully is really great. But Gosling just doesn't want to succeed in bringing the isolated good aspects together to a coherent whole. The story is more than confused and some scenes make no sense at all. Bizarre ideas and bizarre pictures are all well and good. But if they don't serve any real purpose dramaturgically and only serve to make the film seem maladjusted and avant-garde, this leads quite quickly to the fact that the viewer is no longer interested in the story and is soon overwhelmed by heavy boredom.

The ambitions behind the film are more obvious than the story that is supposed to be told here. However, paying tribute to its great idols is simply not enough to deliver a convincing directorial effort. There are interesting moments, brief flashes of cinematic genius - but there's also a lot of rehashed and cerebral rubbish. The end result is atmospheric boredom that will probably leave most viewers somewhat confused. If Ryan Gosling wants to be as convincing a director as he has been several times as an actor, then he definitely still needs to find his own tone. The potential is there, it's just that the execution, which is too much oriented towards other filmmakers, is more than poor. And for that, unfortunately, it can only be given a conditionally worth seeing