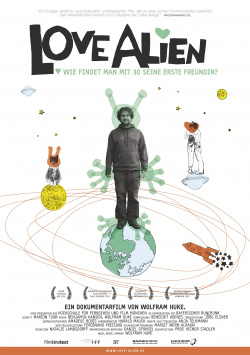 Singles parties, speed dating, online dating portals - the business with desperate singles is booming. Especially in the big cities there are more and more singles, including many who have never experienced the happiness of a relationship. But why are there so many permanent singles, so many men and women who don't know what it's like to cuddle, laugh or argue with a partner? And does it get easier with advancing age or rather much harder to put an end to being permanently single? Young filmmaker Wolfram Huke wants to get to the bottom of these and other questions in his first documentary Love Alien.

To do so, he has chosen a rather bold narrative perspective. Being one of the Love Aliens himself, Huke has captured the year between his 29th and 30th birthdays on camera, and in the form of a video diary, he captures the life of a perpetual single and his efforts to change it. He sees a therapist, meets with style consultants, goes online to find a partner, and chats with a good friend who shares the same fate as he does. Opportunities to meet a woman abound, especially for singles in the big city. This also becomes clear to Huke during his research. But these opportunities alone are not enough to actually find a partner. For it also in the personal attitude some must change. And that is not really easy after almost 30 years of being single.

Love Alien has some very good and interesting moments to offer, is sometimes amusing, then again a little depressing. The problem with the film is that it seems to lose sight of its real goal at some point. At the beginning the documentary reminds us of the works of the American Morgan Spurlock, who likes to deal with fast food companies, the advertising industry and other institutions in an amusing but also unmasking way. At first Huke seems to want to show in a similar way how an entire industry tries to lucratively exploit the desperation of the many permanent singles. This has potential and especially at the beginning brings very promising moments.

But due to the fact that Huke was not allowed to film on some dates and turns the focus more and more on his own person, seemingly not realizing that he actually only stands in the way of his happiness himself, the film loses more and more meaning at the end and degenerates into a not really captivating self-portrait that ends in a fruitless monologue. Although his therapist, his mother and also his acquaintance point out things he could and should change in order for a woman to imagine a relationship with him, Huke just doesn't seem to want to take this advice to heart. He tries a few things, but quickly throws in the towel again. This is very honest and also brave, because Huke doesn't necessarily present himself in the best light. But what the film promises to be at the beginning is prevented by this behaviour. And so, after a very good and entertaining beginning, this documentary is unfortunately just like a disappointing date in the end: superficial, a bit embarrassing, and it feels way too long. Only conditionally worth seeing!