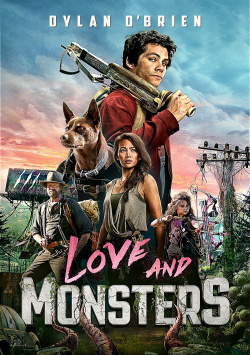 It could have all been so beautiful: Joel (Dylan O'Brien) is dating the love of his life, Aimee (Jessica Henwick), and firmly believes in a future together after high school. But then a worldwide monster apocalypse breaks into the middle of this teenage romance, separating Joel and Aimee. On the run, the boy's parents die and he then retreats underground with a few other survivors. Here he spends the next few years, connected to Aimee only by radio. But one day Joel makes an unexpected decision: he wants to leave his new community and wander alone through the monster-populated land to finally see Aimee again. Eighty miles lie ahead of him, to be covered on foot - 80 miles that will change him forever...

"Love and Monsters" may not reinvent the wheel dramaturgically. But it is thanks to a wonderfully original and sometimes really surprising realization that director Michael Matthews' second feature film work has become extremely entertaining and worth seeing. From the partly quite sarcastic tone, the mix of fantasy adventure and monster comedy strongly reminds of "Zombieland", but fortunately always goes its own way, so that in the end some parallels are recognizable, but the film never seems like a "Zombieland" clone.

Dylan O`Brien, who already had to fight his way through a dystopian world in the "Maze Runner" movies, plays the character of the anxious Joel with a lot of charm and an amusing wink. He is thus convincing in the comedic moments as well as in the more serious scenes. O`Brien`s human co-stars play a rather minor role, with Michael Rooker and newcomer Ariana Greenblatt the most likely to leave a lasting impression.

The special effects are really good in many scenes, with the design of some of the monsters in particular being really great. This in combination with the often humorous undertone of the staging contributes considerably to the fact that "Love and Monsters" has become such an entertaining fantasy adventure, which can definitely gain something new from the genre despite many familiar set pieces. If you just want to switch off for almost 100 minutes and have a good time, you shouldn't miss this slightly different dystopia. A film full of monsters, romance, suspense, humor and a lot of heart - and therefore also: absolutely worth seeing!

Cinema trailer for the movie "Love and Monsters (USA 2020)"
Loading the player ...