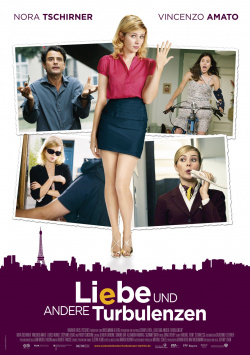 Love and Other Turbulences

Paris-based stewardess Greta (Nora Tschirner) is on cloud nine. Finally, her boyfriend, Italian bus driver Paolo (Vincenzo Amato), has gotten around to proposing to her. The two seem perfect for each other and nothing really stands in the way of a happy ending. But just days after Paolo proposes, his demeanor changes. His thoughts are constantly somewhere else, even during sex, and he no longer has anything in common with the soul mate Greta wanted to spend the rest of her life with. What the young woman doesn't suspect is that Paolo has his eye on an unknown beauty (Louise Monot), whom he has seen time and again from the bus, riding her bicycle. When, on the advice of his best friend Derek (Paddy Considine), he finally brings himself to approach the attractive C&eacute;cile, it has disastrous consequences. For the pick-up ends with C&eacute;cile ending up in front of Paolo's bus and in the hospital with a broken arm and leg. Without a job and more or less unable to move, C&eacute;cile now has no one to look after her two children. And that's where Paolo has to step in - the start of a chaotic double life that could cost the bus driver a lot more than his job.

Jeremy Leven, who has written such diverse films as Beim Leben meiner Schwester, Wie ein einziger Tag and the German comedy Wer`s glaubt wird selig, has returned to the director's chair for the first time since his 1995 box office hit Don Juan de Marco to direct the Euro-comedy Liebe und andere Turbulenzen. With actors from Germany, Italy, England and France, Leven filmed a romantic tangle of the more over-the-top kind in Paris that leaves a very ambivalent impression. So there are some scenes that work really well and provide some really hearty laughs especially with amusing wordplay. Then there are other moments in which Leven relies more on classic slapstick, which can also be quite amusing at times. And finally, there are the moments when the humour comes across as so over-the-top that the timing gets completely out of hand and it's not the laughing muscles that are being stretched, but only the nerves of the audience.

So laughter and annoyed eye-rolling alternate with nice regularity, from which the romantic note of the story suffers in particular. At some point, the viewer doesn't really care whether there will be a happy ending for Paolo and Greta, and of course that's particularly inconvenient for a romantic comedy. So Love and Other Turbulences would actually be doomed to fail despite its successful moments. But the fact that the film is still worth watching is due to the still very effective charm of Nora Tschirner, who saves many a scene here. And also Paddy Considine, who is otherwise rather subscribed to melancholy dramas, makes up for some of the film's weaknesses as a charming macho.

Anyway, it can't be blamed on the actors that the film only works to such a limited extent. The humor and timing seem so unbalanced and it just doesn't really want to come together as a coherent whole. Whether that's because an American auteur is trying to mix wit and flair from different European cultures is up for debate. But the fact is that the comedy is a jumbled mess that is sometimes charming and funny, sometimes completely unfunny and just plain exhausting. Fans of Nora Tschirner probably won't regret buying a movie ticket. But those who simply hope for a funny romantic comedy with French flair will leave the cinema rather disappointed. Therefore: unfortunately only very conditionally worth seeing!

Cinema trailer for the movie "Love and Other Turbulences (Deutschland 2013)"
Loading the player ...