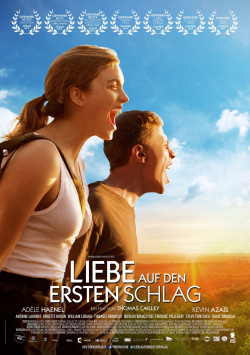 Actually, 18-year-old Arnaud (Kévin Azaïs) wants to enjoy his life. Hanging out with friends on the boardwalk, picking up girls - just all the things you do when you're a teenager. But since his father's death, he's had to help his older brother Manu (Antoine Laurent) keep the small family carpentry business going. On his first job, he meets the prickly Madeleine (Adèle Haenel), who is preparing for the coming end of the world with some tough survival training. Although at first glance they seem to have nothing in common, the reserved Arnaud is immediately attracted to the gruff girl. When the two sign up for a big army survival training camp, their relationship takes an unexpected turn for both of them...

Love at First Strike is a very unusual romance that thrives on its unused cast, some very atmospheric imagery and a nicely constructed story. The two main characters are very interestingly drawn. At their first meeting, which is then also responsible for the German title, it seems quite clear what type of person they are: Arnaud the day-in-the-life sonnyboy, Madeleine the tomboyish loner. But little by little the film allows the audience to look behind these facades. In the process, very authentic, multi-layered characters reveal themselves. If at the beginning it seemed very unbelievable that something like romantic sparks could fly between them, at some point it becomes clear: these two simply belong together.

Director Thomas Cailley delivers with his multi-award-winning directorial debut a film that is difficult to pigeonhole. Deftly eluding all the usual clichés, it is thus neither a classic teen romance, nor simply dreary youth drama or loose comedy. Rather, it's a little bit of everything, creating a refreshingly non-conformist, very honest look into the troubled emotional world of young people desperately seeking their place in life or prevented by fear of an uncertain future from enjoying a carefree youth. Even though there are some slight exaggerations, Arnaud and Madeleine seem very real overall, which is of course also due to the convincing acting of Adéle Haenel and Kévin Azaïs.

In the middle part, the film then has to struggle with some small lengths. But this doesn't really weigh negatively in the end. Because the disarming ease of the production even in the somewhat tamer moments and the infectious charm of the main actors comfort over so many noticeable weaknesses. But even if the film ultimately lacks that certain something that could give it a more lasting effect or even a small cult status, especially for younger viewers, Love at First Sight is the best example that films about teenagers, their worries, their dreams and their love, can work not only for a young audience and be profound and entertaining at the same time. And for that there is a clear: Absolutely recommendable!

Cinema trailer for the movie "Love at First Sight (Frankreich 2014)"
Loading the player ...