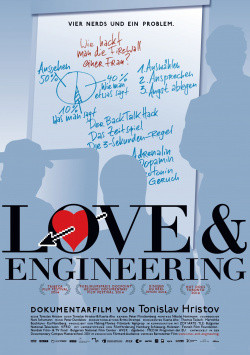 In a time in which there is the right device for everything and the right app for every need, there must also be a formula for how to conquer a woman. At least that's what computer freak Atanas is firmly convinced of. For him, it's clear that all you have to do is get past a firewall to get to a woman's heart and that you can hack her emotions to win her over. After all, women would hack men's brains every day with push-up bras, miniskirts or eyeliners - so it must work the other way around too. With the single nerds Todor, Tuomas, Marcus and Andon as guinea pigs Atanas wants to prove that his formula of love works. From the first flirtation to the right body odor to the first kiss - all this can be perfectly planned. But can real feelings really be so easily calculated?

The documentary Love & Engineering explores this question in a rather entertaining way. Although as a viewer one is inclined to say from the outset that feelings cannot be reduced to simple formulas, it is fun to watch Atanas and his subjects try to outwit their shyness and inexperience through scientific logic. Scenes like the blind dates, in which the wired single men reveal all their weaknesses in dealing with women despite being directly connected to Atanas, give the film its documentary-like realism despite some obviously contrived moments. It's also in these moments that the longing-for-love nerds really grow on you, and you wish for them to succeed with their experiment. Maybe Atanas really is right - after all, he's been happily married for two years, even though he too is a total computer nerd and even still stutters.

The field experiment with the four programmers lasted two years. There are some small moments of success, but also crude setbacks, which are no easier to cope with if you can explain them logically. The whole thing is done in a charming and humorous way. However, the basic idea doesn't carry the movie over almost 90 minutes of running time. After about an hour, the nice idea is badly exhausted and there are some clear lengths. The whole thing does take an interesting turn when the nerds go on a singles cruise and it almost comes to fisticuffs between the young men. But the strength that the documentary has at the beginning is not matched even in these moments.

The beautiful ending and the message it carries, however, again compensates a little for the tough last third. Overall, Love & Engineering is a worthwhile watch on the subject of loneliness in a completely connected world, about emotional atrophy in a fully mechanized society. It's actually a very serious and sad subject, which Tonislav Hristov treats with refreshing lightness and tongue-in-cheek realism. A bit too long, but still definitely: worth seeing!