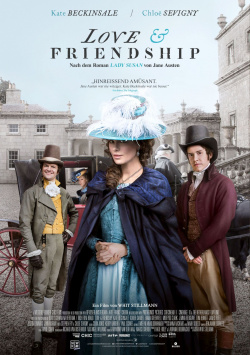 Beautiful widow Lady Susan Vernon (Kate Beckinsale) knows how to turn men's heads - and that's why she has quite a dubious reputation attached to her. That's why she retreats to the estate of her brother-in-law Charles (Justin Edwards), hoping that the rumors about her affairs will soon vanish into thin air. But of course, Lady Susan does not remain idle. In order to once again become a respected member of high society, she searches for suitable, wealthy husbands for herself and her daughter Frederica (Morfydd Clark). But even though there are enough interested parties, the selection proves to be much more complicated than expected. For what would be good for wealth is not necessarily what the heart wants.

Love & Friendship is the very light-hearted, amusing film adaptation of the Jane Austen epistolary novel Lady Susan. Director Whit Stillman has turned the original into a fast-paced comedy with delightful wordplay and plenty of irony. The story may seem a bit confused at first, but the very light-footed directing style makes it easy to just let yourself fall into the turbulent hustle and bustle. It also helps that Kate Beckinsale clearly had a blast playing the role of the manipulative beauty. It's a great pleasure to watch her turn men's heads and use them for her own purposes.

Stillman has managed the feat of making his film feel like a typical Jane Austen adaptation, but at the same time it feels a tiny bit like a loving parody of those works. This adds extra wit to the dialogue and prevents the more emotional scenes from ever drifting towards kitsch. A pleasing amount of bite and amusing nastiness provide plenty of fresh air in the slightly dusty genre. Even if not every gag works, some characters seem too overdrawn and there are also a few small lengths despite the short running time, you will still be entertained as a viewer.

Who loves Jane Austen, but also likes to look at the whole thing with a wink and who appreciates costume movies with really great female main characters, should not miss this snappy comedy in any case. And so, just because of Kate Beckinsale is already quite clear: Absolutely worth seeing!