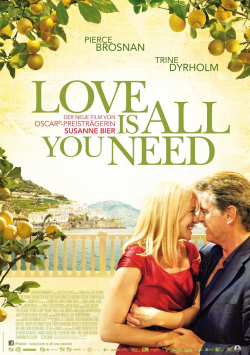 Love is all you need

Life means well for gentle hairdresser Ida (Trine Dyrholm). She seems to have just won the exhausting battle against cancer, when she catches her husband Leif (Kim Bodnia) with young Tilde (Christiane Schaumburg-Müller) in their own living room. The wedding of their daughter Bitten (Lina Kruse) in Italy is supposed to bring a little sunshine into their lives. But on the way to the airport the next catastrophe occurs: in the parking garage Ida drives into the expensive car of a smart businessman, not suspecting that it is Philip (Pierce Brosnan), the father of her future son-in-law Patrick (Sebastian Jessen). Since the accidental death of his wife, he has withdrawn completely into his work and is completely closed off to other people. This is not only felt by Patrick, but also by Ida. But when her life on the picturesque coast of Amalfi threatens to fall into chaos because Leif arrives at the wedding with Tilde in tow, Philip proves to be an amazingly sensitive and helpful support. A friendship begins between the two, which seems to become more and more emotional in the midst of the wedding turmoil. But it threatens to become only a temporary friendship for which no happy ending is destined.

Not since she won an Oscar for her last film, In a Better World, has a new work by Danish director Susanne Bier (After the Wedding) been met with high expectations. But there is naturally always more pressure on the successor to an Oscar winner, which Bier has now countered in a completely unexpected way. For instead of staying true to her style of directing moving dramas that tend to be heavy due to their realism, she presents Love is all you need, a surprisingly light-hearted tragicomedy with a strong romantic undertone.

While this story again makes use of some heavy themes such as a bout with cancer, the loss of a loved one, familial estrangement or adultery. But Bier counters the gravity of these aspects with light comedy, the picturesque scenery of the Amalfi Coast and the charming acting of her cast. Trine Dyrholm, who has already appeared in Bier's Oscar winner, and ex-007 Pierce Brosnan in particular do a first-rate job of charming the audience.

But Love is all you need fails to leave a truly lasting impression, despite some quite charming moments. The problem is the numerous clichés that Bier can't completely steer clear of, despite obvious efforts, and the yet very obvious predictability of one of the big twists that turns Bitten's wedding into an absolute disaster, which ultimately leave a somewhat arbitrary impression. Only the warm-hearted way Bier conveys the characters' emotions, their fear of starting over, and their newfound lust for life saves the film from being nice but somehow inconsequential.

The good mix of drama and humor, a convincing Pierce Brosnan, beautiful pictures and some very touching moments make Love is all you need an absolute must-see for all lovers of romantic arthouse comedies despite some minor flaws. Worth seeing

Cinema trailer for the movie "Love is all you need (Dänemark/Schweden/Italien/Frankreich 2012)"
Loading the player ...