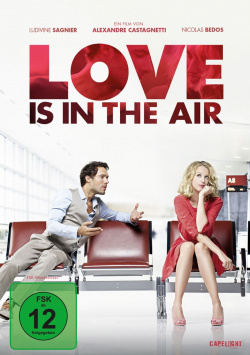 Love is in the Air - DVD

Film: Actually Julie (Ludivine Sagnier) is completely inspired by happiness when she boarded the plane from New York to Paris. Because the young woman is on her way to her wedding and she is known to be the most beautiful day of her life. It's just too bad that her ex Antoine (Nicolas Bedos), who is on his way to an important job interview, is sitting next to her on the plane. Even years after their separation there is still a lot of bad blood between the two - but also a lot of passion. And the seven-hour flight to Paris gives them plenty of opportunity to come to terms with the failed relationship. And it soon becomes clear that Antoine really wants Julie back, while she just wants to be left alone. After all, she can't forgive him for his supposed misstep. But little by little it becomes clear that not everything went as it seemed before. But can the past love really blossom again, especially since Julie seems to have found her new happiness long ago?

Similar to the opening sequence of "Love is in the Air", the visual language and soundtrack of "Love is in the Air" brings back memories of the wonderful romantic comedies of Nora Ephron ("E-Mail für Dich", "Sleepless in Seattle"), who died in 2012. Although Alexandre Castagnetti's second feature film can't quite play in the league of Ephron's works, it does come quite close in some moments. Apart from the soundtrack and the good camera work, the two main actors Ludivine Sagnier and Nicolas Bedos, between whom there is a very good chemistry, also make sure of this. This gives a lot of fire to the verbal battles between Julie and Antoine, which are further fuelled by an ever increasing passionate tension.

What works particularly well is the relationship between the ex-pair told in flashbacks, from the first meeting to the bitter end, whereby the truth only gradually becomes a puzzle for both the viewer and the two lovers. It's this cleverly constructed plot structure that makes the movie especially entertaining and even a little bit surprising, despite numerous clichés. Admittedly, some gags are a little flat and some minor characters are overdrawn. But the film easily compensates for such weaknesses with its charming staging.

Because even though "Love is in the Air" may not be a great cinematic art, this tangy love comedy is still a perfect feel-good entertainment for all hopeless romantics. There are moments of laughter and unrestrained languor, there are likeable characters, beautiful music and many classic Rom-Com elements that make it impossible not to end the film with a happy smile. Those who love beautiful romances in general or especially French love comedies should not miss this very special flight to the city of love. Absolutely worth seeing!

Picture + sound: The DVD image pleases with its warm, ingratiating colours and a good overall sharpness, which makes even smaller details stand out well in the brighter scenes. As usual in a romantic comedy, you shouldn't expect any surround fireworks when it comes to sound. However, the Dolby Digital 5.1 Mix always fulfils its purpose of transporting the dialogues and the soundtrack out of the speakers in a well coordinated and powerful way. Good!

Fazit: "Love is in the Air" is a beautiful romantic comedy that scores with its likeable actors and some nice plot twists. The movie radiates the flair of a typical Nora Ephron comedy at many points, even though the level of movies like "E-Mail für Dich" or "Schlaflos in Seattle" isn't quite reached at the end. But all in all a real feel-good movie for hopeless romantics, which presents itself on the DVD in good picture and sound quality and also has some nice extras to offer. But there is a clear one: Absolutely recommendable!