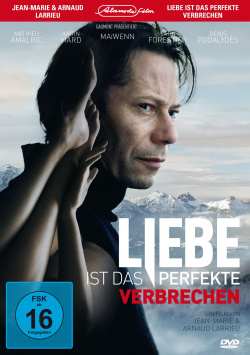 Love is the perfect crime - DVD

Film: When literature professor Marc (Mathieu Amalric) gives his lectures, it's mainly the students who hang on his lips. And Marc knows how to take advantage of his effect on the young women. It is not unusual for him to take one of the attractive students to his chalet in the mountains for "private tutoring". Marc enjoys this life and all the comforts it offers him. But when one of the girls Marc had an affair with disappears without a trace, it is quickly over. Not only does the police constantly show up at the university and ask questions about the missing Barbara, Marc's management also makes it clear that his behaviour will not remain without consequences. When Barbara's beguiling stepmother Anna (Maïwenn) turns up and turns Marc's head, the otherwise so prudent professor threatens to lose control completely. Maybe this is because he has something to do with the disappearance of the girl?

"Love is the perfect crime" is the film adaptation of the novel "The Restless" by cult author Philippe Djian ("Betty Blue"). The directing brothers Jean-Marie and Arnaud Larrieu ("Painting or Loving") have staged an atmospheric thriller based on the material with a pinch of black comedy and a touch of mystery, in which the excellent visual language is particularly striking. Especially the contrast between the almost futuristic university building, for which the perfect motif was found in the Technical University of Lausanne, and the rustic mountain landscape captured in the Haute-Savoie (among other things near Chamonix and the municipality of Demi-Quartier) has a really fascinating effect.

Embedded in the captivating visual realization is the strong play of the actors, above all Mathieu Amalric, who really convincingly embodies the notorious womanizer with all his facets. But also Maïwenn ("Poliezei") or Sara Forestier ("The Name of the People") raise the movie to a high level of acting. However, they are confronted with a not always captivating staging, which loses itself too much in some moments and thus lets smaller lengths emerge, which are intensified by the very carried narrative tempo. It's true that the movie's fundamentally captivating atmosphere never gets lost. But in some moments she doesn't manage to unfold her full power and triumph over boredom.

Although there are a few hangers, it's still worth getting involved with the story as well as the slow narrative tempo. For the further the events progress, the more Marc seems to lose his connection to reality. And that makes the anyway somewhat cryptic staging more and more interesting and gripping towards the end. The whole thing could be a bit more evil at times, but the bottom line is that "love is the perfect crime" is a very good thriller, which lovers of sophisticated French entertainment cinema shouldn't miss out on. Worth seeing!

image + sound: The image captures the film's fascinatingly hypothermic mood very well. The image sharpness is at a very high level and allows even smaller details to come into their own. The colours are atmospheric and underline the captivating visual language of the film. The overall sound is very restrained, but with an atmospheric sound backdrop it creates a positive overall impression. Good!

Extras: As a bonus there is an interesting interview with the directing brothers Jean-Marie & Arnaud Larrieu (ca. 12:51 min.), as well as conversations with Mathieu Amalric (ca. 17:17 min.) and Maïwenn (ca. 7:30 min.). In addition there is a short, but worth seeing Making of (ca. 9:07 min.), as well as the trailer for the movie. Gut!

Fazit: "Love is the Perfect Crime" is a calm, atmospheric film, which with a fascinating visual language, great actors and a pinch of cynical humor, despite the very slow pace of the production, turns the work into a gripping mix of thriller and drama, which lovers of sophisticated French entertainment cinema should not miss. The DVD presents the film in atmospheric picture and sound quality and also has some nice extras on board. Recommended!