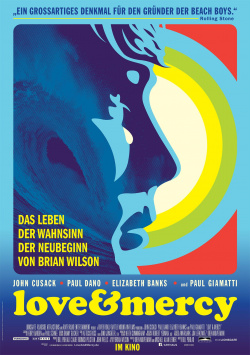 His songs thrilled an audience of millions and with the Beach Boys he broke the hearts of teenage girls around the world. But the success that burst upon Brian Wilson (Paul Dano) at a young age took its toll, still leaving its mark on Brian's (John Cusack) soul many years later: divorce from his first wife, drugs and psychological problems resulting from the enormous pressure to succeed and the urge to live up to his hypercritical father led to the deep fall of a great genius. His entire daily life is like a gray fog, through which his psychiatrist and confidant Dr. Landy (Paul Giamatti) maneuvers him with medication and strict isolation. But then Brian meets car saleswoman Melinda (Elizabeth Banks), who gives Brian an unexpected zest for life and hope - something Dr. Landy is not at all pleased to see...

Love & Mercy is only superficially a biopic about legendary beach boy Brian Wilson. On two time levels, director Bill Pohlad creates a haunting portrait of a man in danger of shattering from the struggle between his musical genius and his personal demons. It's the true story of a man who seems to have lost his own identity to his psychoses and their mistreatment, and who only gets a chance to find his way back to life after many years of estrangement from his children, family and bandmates through the unyielding love of a woman. That may sound a bit campy, but it's not. That's because the pleasantly non-conformist, somewhat challenging production and the great acting of Brian Wilson actors Paul Dano and John Cusack turn the story into an extremely engaging drama that skilfully avoids almost all the usual cliché pitfalls.

So anyone expecting a film about the rise and career of the Beach Boys is likely to be disappointed. Of course, the music of the legendary formation plays an important role and especially the creation of their masterpiece Pet Sounds is repeatedly in the foreground. However, this only provides the framework for a very personal story, which only marginally has something to do with the career of the Sunny Boys from California. In his production, Pohlad tries to make Wilson's fears and confused world of thoughts tangible for the audience. As a result, the film feels like a muddled trip at some points. This may be a little exhausting, but is ultimately one of the reasons why the film is able to leave such a positive and powerful impression in the end.

Another reason is the actors. Whether it's Paul Giamatti as a shady psychiatrist, Elizabeth Banks as a car saleswoman who seems a bit naive at first but then turns into a determined fighter, or Jake Abel as Brian Wilson's cousin and bandmate Mike Love, they all deliver very strong performances. But the film is clearly carried by John Cusack and Paul Dano, whereby especially Cusack's performance stands out. While Dano also plays very well, it's just that his Brian Wilson is very close to other characters he's played time and time again in recent memory. Cusack, who has unfortunately been seen mostly in unconvincing home movie premieres in the recent past, finally gets to show off his versatile talent once again here. And that simply leaves an impression.

Love & Mercy is not an easily accessible film, not a pure work of entertainment for a mass audience. But if you appreciate first-class arthouse cinema from America and want to experience a very special portrait of an artist away from the usual biopic norms for once, you should definitely not miss this film. Absolutely worth seeing!