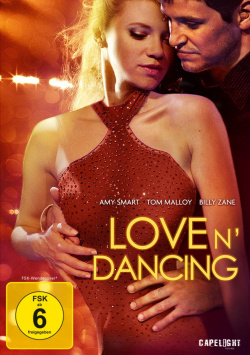 Film: Jessica (Amy Smart) has long since given up on her dream of a dancing career on Broadway. She manages quite well to convince herself that she has a job as a teacher that fills her up and that she has found the love of her life with workaholic Kent (Billy Zane), who spends more time on his cell phone than with her. But there's still a passion bubbling up inside the young woman. And dance instructor Jake (Tom Malloy), who has been virtually deaf since a viral infection in his teens, can reignite it. Because after the two-time West Coast Swing world champion gives a talk at Jessica's school, she decides to book a dance class with Jake with Kent. This way, she hopes to rekindle the fire in their relationship. But of course Kent cancels the evening together at the last second and so now Jake himself takes care of Jessica. He is immediately taken by her talent and passion, which leads him to persuade her to dance with him regularly from now on. Sparks fly between the two of them more and more violently, which also has a positive effect on their joint dance lessons. And although Jessica hasn't practiced properly for years, Jake suggests that she accompany him to a tournament as his partner. But not only Kent, but also Jake's old dance partner does not like this at all...

Love N' Dancing is strongly reminiscent of dance films like May I please? with Richard Gere and strictly follows the prescribed paths of the genre. One Like None director Robert Iscove truly doesn't offer any big surprises. The fact that Jessica doesn't end up staying with Kent is clear from the first minute due to his overly clichéd characterization. Billy Zane plays the role very amusingly, but even his amusingly exaggerated portrayal can't prevent the character of Kent from being drawn in a very stereotypical way. This is also true for the other characters, who are embedded in the predictable plot strictly according to the textbook.

Nevertheless, the film offers quite good entertainment overall. This is partly due to the likable lead actors. The chemistry between Amy Smart (Crank, Road Trip) and Tom Malloy is spot on, which is why not only their dance scenes together, but also the purely dramatic moments work well. The dance sequences themselves don't seem quite as spectacular and hip as you'd expect from contemporary dance films like Step Up or Streetdance. But that's appropriate in that the film isn't aimed at their target audience anyway, but rather at viewers 30+. And they should also be able to enjoy the more classically held dance scenes of the rousing West Coast Swing Dance.

Even if the film seems more like a simple TV production and offers no surprises worth mentioning in any way, fans of romantic dance films like May I please? are offered enough nice and entertaining entertainment on balance to be able to risk a look here confidently. Worth seeing!

Picture + Sound: Like the film itself, its technical realization also offers good average. Image sharpness, coloring, contrast matching - all this is just as on a decent level, as well as the sound mixed a little too flat in the dialogue, which at least in the dance scenes accompanied by music has a little movement in the surround area to offer. Good!

Extras: As a bonus there is an enthusiastically recorded, sometimes even quite informative audio commentary by Amy Smart and Tom Malloy, which is unfortunately without German subtitles. In addition, there is a 30-minute long course in West Coast Swing Dance with the choreographer of the film.

Conclusion: Love N' Dancing is a nice little dance film, which always has the character of a light TV movie, but which can at least come up with likeable actors, a nice romance and a few dance sequences worth seeing. If you want to dance yourself after the movie, you'll get the appropriate tips in the bonus material. Lovers of dance films who feel too old for the Step Up and Streetdance films, a thoroughly recommendable alternative