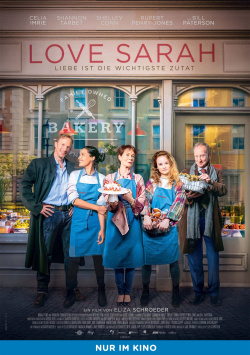 Love Sarah - Love is the most important ingredient

Actually, Sarah wanted to open her own bakery in the London district of Notting Hill together with her friend Isabella (Shelley Conn). But a bicycle accident unexpectedly snatches Sarah from life. Alone, Isabella doesn't trust herself to make their shared dream come true. After all, Sarah was the celebrated baker. But Clarissa (Shannon Tarbet), Sarah's 19-year-old daughter, convinces her not to give up the bakery. With the support of her eccentric grandmother Mimi (Celia Imrie), Clarissa sets out to make her mother's legacy a reality. And in celebrity chef Matthew (Rupert Penry-Jones), Sarah's ex, they also find the right talent for the bakery. Everything seems to be going well - until the customers stop coming after the opening. That's when the mismatched trio of ladies come up with an unusual idea.

"Love Sarah - Liebe ist die wichtigste Zutat" is a lighthearted blend of drama and comedy that marks German director Eliza Schroeder's feature debut. Schroeder, who herself lives in Notting Hill with her family, has directed a nice love letter to her neighborhood that perhaps doesn't quite get to the heart as much as it could have. But at least the sight of the many delicacies that are baked in the course of the 100 minutes makes your mouth water, which also makes dramaturgical weaknesses easier to digest. No wonder, since the culinary delicacies were specially prepared for the film by top chef Yotam Ottolenghi. One would like to try it oneself.

Visually, the whole thing seems a little indecisive. For example, beautiful, still shots of London or of tasty baked goods alternate with sometimes very intense close-ups in which the camera seems to be constantly in motion. In terms of content, little new ground is broken here. Some of the conflicts seem rather contrived and every plot twist, no matter how small, is relatively predictable. However, this does not change the fact that the intended target audience is well served here and in some moments then also a really nice film is served.

With involved in the realization of "Love Sarah - Love is the most important ingredient" were also Jakob Zapf and Tonio Kellner, the founders of the young Frankfurt production company Neopol Film. Their entry into the film business - despite some weaknesses - actually offers the perfect fodder for this time: light fare that lets the audience forget the difficulties of everyday life for a brief moment. For those not expecting more, this romantic tragicomedy can definitely be recommended. Worth seeing!

Cinema trailer for the movie "Love Sarah - Love is the most important ingredient (Großbritannien / Deutschland 2020)"
Loading the player ...