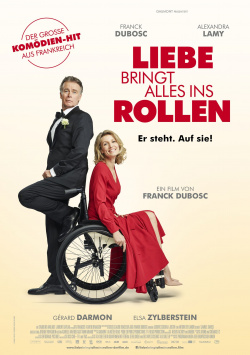 Love gets everything rolling

Jocelyn (Franck Dubosc) is a ladies' man who would probably make even Casanova green with envy. To get a woman into bed, no lie is too bold for him. And so he tries it with the attractive nurse Julie (Caroline Anglade) by pretending to be in a wheelchair. The plan seems to work and Julie even invites him to dinner. But the sure thing turns into a disaster when it becomes clear that Julie wants to set Jocelyn up with her sister Florence (Alexandra Lamy), who is actually confined to a wheelchair. More and more, Jocelyn gets caught up in his worst lie yet, which wouldn't be a big deal - if he didn't suddenly develop feelings for Florence.

With Love Makes Everything Happen, director and leading actor Franck Dubosc has staged a light comedy, which is predictable from beginning to end, but which offers enough wit and charm to still be entertaining. Especially at the beginning, the French hit movie impresses with some pleasantly nasty gags and delightfully over-the-top slapstick. The gag density and pacing are absolutely spot on here, which unfortunately can't be maintained throughout the entire running time. Especially in the last act, the story meanders too slowly and the laughs decrease significantly.

Surely, that's intentional in so far as it's meant to focus on the emotions in this part. But really, the nicely staged outcome of the romantic comedy doesn't go to the heart. That's not because of the actors, who manage to draw the characters very charmingly despite quite a few clichés. Also, the chemistry between Dubosc and Alexandra Lamy is just right, which is why the love story itself works very well. It's quite understandable why the Casanova develops something like true love with Florence for the first time. But the way to it gets tougher by the minute, which then just leads to the fact that the emotional power can hardly unfold at the end.

Love Makes Everything Happen is a nice comedy, nothing more, but also nothing less. The film starts with a lot of potential, which is given away a bit towards the end. Nevertheless, the entertainment value is high enough to recommend this film to lovers of light French comedy entertainment. Worth seeing

Cinema trailer for the movie "Love gets everything rolling (Frankreich 2017)"
Loading the player ...