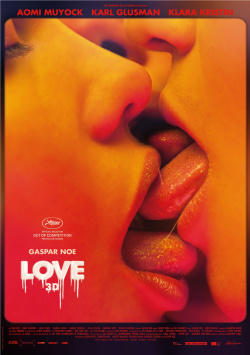 American Murphy (Karl Glusman) and French Electra (Aomi Muyock) were a true dream couple. Their love was tempestuous, unbridled, passionate. There were no taboos, no boundaries - until a threesome with their young neighbor Omi (Klara Kristin) changed everything. Because after that night, Murphy also went to bed alone with Omi, who subsequently got pregnant. Now two years have passed and Murphy is living unhappily with Omi and their child together. He hasn't heard from Electra in a long time. But when he learns on New Year's Day that she may have done something to herself, he sets out on a desperate search for her. The search becomes a journey for him into their shared past, forcing him to confront all the dark shadows surrounding the end of their love.

Whenever Gaspar No&eacute; makes a film, you can expect provocation, the testing of boundaries and scandal. Especially when it comes to the depiction of sex and violence, No&eacute; hasn't exactly been squeamish about it in the past. It's no wonder, then, that works like Irreversible, Enemy of Man, and Enter the Void are intense, yet disturbing cinematic experiences that have always generated lively debate upon their release. Love will be no different, even though No&eacute; claims that this is its most romantic film to date. Right from the first few minutes of the 3D-shot drama, the director makes it clear that he's not going to show any soft-boiled florid sex a la Hollywood, but that things are going to get extremely explicit here.

blurs the line between artful eroticism and pornography to such an extent that the film was only given the FSK 18+ seal after an appeal. Admittedly, some of the sex scenes are very passionately staged in their realism and thus free themselves from the accusation of being pornographic. But at the latest when No&eacute; shows the penis of its main character in close-up and Murphy's 3-D orgasm virtually pours into the faces of the audience, then this is not art, but pure provocation. This also weakens the intensity of more restrained staged scenes, which doesn't do the film any good overall. For this reveals much more clearly that the story hiding behind the constant copulation is surprisingly thin and conventional.

Surely, No&eacute; remains an inappropriate and interesting filmmaker who explores the boundaries of what is possible and always knows how to fascinate, especially on a visual level. Still, despite his explicit depiction of sex, Love fails to leave a lasting impression. To be sure, the film does a good job of showing what passionate love looks like and the destructive power it can have. But it wouldn't have needed two and a half hours to achieve that impact. No&eacute; could have done that effectively in 90 minutes. So there are very many tough moments and in the long run tiring scenes, which at the end no longer rousing and passionate, but just boring. And therefore: only for intrepid No&eacute;-fans who are not bothered by very open depiction of sexual acts, worth seeing!

Cinema trailer for the movie "Love (Frankreich/Belgien 2015)"
Loading the player ...