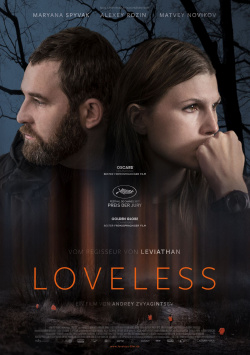 The marriage of Zhenya (Maryana Spyvak) and Boris (Alexey Rozin) has long been on the rocks. Boris has been living with a new woman who is expecting his child. And Zhenya is also seeing her new lover on a regular basis. But when the two do meet, arguments and mutual accusations prevail. In between is their mutual son Alyosha (Matvey Novikov), who is left completely alone with his grief and fears. One day, the twelve-year-old boy disappears without a trace. The police do little to recover him. And so the hopelessly estranged couple must reluctantly work together to find the boy again.

Loveless is a drama that has been acclaimed at festivals and by the press, and has been nominated for an Academy Award for Best Foreign Language Film. But the rather unwieldy work is unlikely to be for broad audience tastes. Nothing really happens in the first hour. Here, the viewer observes Zhenya and Boris arguing, having lunch with colleagues, making love to their new partners and other mundanities. What director Andrey Zvyagintsev wants to show with this quickly becomes clear: each of the two has a new life, in which not only the other, but also their common son no longer has a place. Establishing that, it wouldn't have taken a whole hour

After that, it's off on a grueling search for the boy. This is already very stirringly directed, as you can definitely feel the helplessness of the parents, who are left alone by the police and have to rely on private help. But also this part of the movie drags on with its grey bleakness. With the very realistic, almost documentary-like staging, Zvyagintsev builds up a very depressing mood that robs the viewer of any form of hope. An enjoyable evening at the movies truly looks different.

Loveless is a work that you have to be able to get involved with. It's a heavy and very long film, which is quite intense in its bulky way - but only if you can get involved with it. If you want to see entertainment cinema in the classic sense, you're in the wrong place. If you have a soft spot for challenging arthouse cinema and don't shy away from depressing stories from real life, you can definitely pay this award-winning drama a visit. Therefore: With restrictions worth seeing!

Cinema trailer for the movie "Loveless (Russland/Frankreich/Belgien 2017)"
Loading the player ...