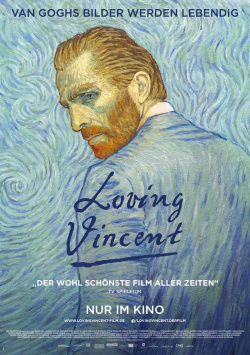 There are always movies where the actual plot disappears behind the artistic execution. Loving Vincent is one such film. Painted by 125 artists from around the world, this was the first film made entirely of oil paintings. The result is 65,000 individual images that make up a visually impressive and unique work in terms of its aesthetics. The story that is told is of secondary importance. And that's just as well, because taken on its own terms, the story is not uninteresting, but it's not necessarily movie-worthy either.

A year after the death of artist Vincent van Gogh, young Armand Roulin (Douglas Booth) comes into possession of a letter Vincent wrote to his brother Theo. With the intention of delivering the letter to Theo, Armand sets off for Paris, only to learn that he also died a few months after his brother. But for Armand, the job doesn't end there. He wants to deliver the letter and travels to the village of Auvers-sur-Oise, the artist's last residence, to do so. The more time he spends here, the more mysterious Van Gogh's alleged suicide becomes. Armand doesn't want to travel back home until he finds out the whole truth.

Loving Vincent is a very ambitious project. The actors either acted in sets based on van Gogh's paintings or in front of a green screen so that they could then be linked to the computer generated elements. In this way, the immortal artist's paintings literally come to life. In total, there are 94 paintings in the film that are very close in form to the original, and 31 others that are essentially or partially the same as the originals. Visually, Dorota Kobiela and Hugh Welchman have succeeded in creating a truly unique film that should be a feast for art lovers in particular.

As a viewer, you can really get lost in the playfulness and the splendor of the colors. The fact that the plot is a bit plodding and could have definitely been tightened up a bit is masked well by this, but not entirely hidden. Even though the story has been meticulously researched and is based not only on van Gogh's paintings but also on 800 personal letters, no particularly rousing dramaturgy should be expected. The plot is interesting, there's no question about that, but it also plods along in a somewhat pleasing manner. Loving Vincent is a fascinating film primarily on a visual level, which deserves to be called a work of art. And that's exactly what makes it, despite its dramaturgical weaknesses: Absolutely worth seeing!