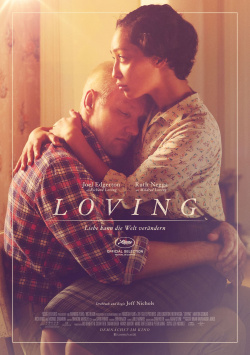 Virginia, 1958: Richard (Joel Edgerton) and Mildred (Ruth Negga) are in love. They are happy together and expecting a child. Richard has bought a piece of land for his Mildred and asks her to marry him. It all sounds like a wonderful love story. But in Virginia, this love was forbidden. Richard's skin was white, and Mildred's was black. So to live together, they married in Washington state... But in Virginia the marriage was not recognized, so Richard and the heavily pregnant Mildred were arrested in the middle of the night and put in jail. Their case is dealt with quickly in court: Either they go to jail for a year or immediately leave the state with the stipulation that they not return together for 25 years. With heavy hearts, the Lovings agree to this deal. In Washington, Richard finds a new job and their family grows by three children over the next few years. But they are not happy here. They want to go back. And so they settle into a fight that will have major implications for American civil rights.

Loving tells the true story of a married couple who had to fight for their love in a system rife with prejudice and racism. Even though the beginning of their struggle, which lasted many years, was almost sixty years ago, the story of Richard and Mildred Loving is unfortunately still very relevant today. Whether it's skin color, origin or religion - unfortunately, a love that doesn't care about such things and is then also accepted by family or society is still not a matter of course. That's why Loving can definitely be called an important film. But at its core, it's also a very beautiful, touching film that's played magnificently by Ruth Negga and Joel Edgerton in particular.

The problem with the film is exactly what Jeff Nichols' previous films have struggled with. Take Shelter, Mud or Midnight Special are really good movies, but they all have in common that they are told very slow and carried. And that's also true for Loving. There are many moments that are actually beautifully directed, have powerful imagery and are extremely strongly acted. But very often Nichols slams on the brakes narratively at just those moments, challenging his audience's patience. And as with his other films, the result is that some viewers will lose their emotional connection to the story. Slowness is fine, as long as it doesn't become boredom. And Nichols generally walks very close to that line.

So you have to be prepared for sequences where not much happens and very long takes. If you can handle that, you'll get a really good movie, where only the ending feels a little rushed. But if you get on your nerves with tough scenes, in which not much is said, but you look into the distance with a frowning face, you might lose interest in the really nice story after an hour at the latest. And therefore there is only with a small reservation the more than deserved: Worth seeing!

Cinema trailer for the movie "Loving (USA/Großbritannien 2016)"
Loading the player ...