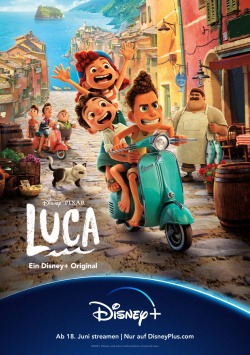 Luca is a young sea monster who has found life underwater far too monotonous. Instead, the boy wants to know what life is like outside the water. But his parents forbid him to go ashore. But when Luca meets Alberto, who has been living on land in human form for some time, he too dares to step out of the water. From then on, the two new friends have a wonderful summer in the small coastal town of Portorosso on the Italian Riviera. But the boys have to be careful, because as soon as they get wet, they revert to their real form - and that could really put them in danger. And then there are Luca's parents, who have also come ashore to get their son back in the water...

"Luca" is the second film from Pixar, after the great "Soul", to premiere on the Disney+ streaming service instead of a planned theatrical release. That's a real shame, because both films - as different as they are - deserved to be celebrated in theaters. Certainly, on Disney+ they have a huge audience worldwide and are likely to be seen by as many people as would have been the case in the cinema. Still, films this lovingly made and wonderfully realized simply belong on the big screen.

Admittedly: "Luca" may not be the most original Pixar film now. It is just compared to "Soul" dramaturgically much simpler knitted (which fits very well to the beautiful story) and is overall much more child-oriented. The story is also imaginative, but especially compared to movies like "Alles steht Kopf" it lacks a little bit of originality. Still: "Luca" is a beautiful, entertaining, warm-hearted and humorous film for the whole family. What I particularly enjoyed is the fact that the humor, while childlike, never comes across as too silly or flat.

Director Enrico Casarosa and his team have so lovingly crafted the small coastal town of Portorosso that the 96 minutes the film lasts feels like a short vacation in Italy. Yes, the film also plays with clichés and stereotypes, but it always does so charmingly and respectfully. It's a beautiful tale of friendship, tolerance and growing up that not only gets its message across, but entertains very well in the process. Once again, this makes it clear: Where Pixar stands on it, is usually really quality in it. For this, it more than deserves a: Absolutely worth seeing!

Luca can be seen on Disney+