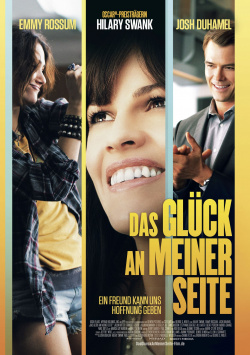 Happiness at my side

It wasn't long ago that Kate (Hilary Swank) was still a celebrated concert pianist. But ever since she received the devastating diagnosis a year and a half ago that she was suffering from the nerve disease ALS, nothing in her once-perfect life has been the same. She has long since needed help in almost every aspect of daily life, and although her husband Evan (Josh Duhamel) lovingly cares for her, it's no longer enough. Although she has long resisted it, Kate must realize that she needs a caregiver. Evan initially attributes Kate's stubbornness for choosing the inexperienced and chaotic Bec (Emmy Rossum), of all people. But although Bec doesn't seem to fit into her world at all, a very special relationship soon develops between the two women. While Kate finds something of a zest for life again through her nurse's non-conformist, humorous ways, Bec also seems to finally find her footing in life through the discipline and responsibility demanded of her. But both women know that their time together will not last...

With Happiness at My Side, director George C. Wolfe (Smiles of the Stars) has staged extremely manipulative emotional cinema. He's not exactly subtle in his efforts to press the tear glands of his viewer(s). And although he sometimes comes very close to kitsch, the story of an unusual female friendship in the face of death works surprisingly well. On the one hand, this may be due to the fact that whenever the story threatens to become too sentimental, it is always lightened up by some restrained humor. But first and foremost, the success of the drama is probably due to the two leading actresses. Of course, Hilary Swank as the dying pianist is in the foreground. For her role requires not only talent on a dramaturgical level, but also a high degree of physical commitment. How Kate loses more and more control over her body due to the illness is played by Swank just as convincingly as the feeling of shame and humiliation, which increases more and more the more she has to let Evan or Bec help her even in very intimate moments.

But only through the enormous contrast to the character of the chaotic Bec, all the strengths of the two-time Oscar winner's play can fully unfold. And that's clearly due to Emmy Rossum. Sure, her character is a slightly over-the-top cliché and, especially at the beginning, her lack of sense of responsibility, punctuality or politeness just come across as selfish and exhausting. But the more this façade crumbles, the more it also becomes clear how important a person like Bec in particular is to Kate during this difficult, final phase of her life. Through the relationship between the two mismatched women, one is helped to find her way out of life, while the other finally seems to find support and meaning in hers. And that's exactly what makes this film so moving and worth watching, despite some clichés and overly thick moments.

However, it must also be said that the film doesn't necessarily feel like a cinema production, but rather like good TV fare. That's not necessarily a negative thing, as the quality of TV productions has gotten better and better, especially in recent years. But it's just that the film doesn't need to be seen on a big screen to fully develop its emotional impact. If you love moving US dramas with a little bit of humor, a lot of heart and a pinch of kitsch, you can still invest the money for the movie ticket. All others can safely wait for the home cinema release or the TV broadcast. But that doesn't change the deserved conclusion, which is quite clear: Worth seeing!

Cinema trailer for the movie "Happiness at my side (USA 2014)"
Loading the player ...