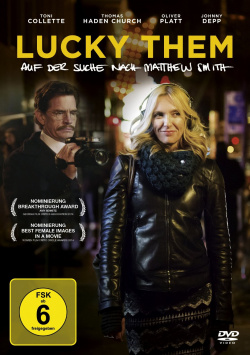 Lucky Them - In Search of Matthew Smith - DVD

Movie: Ellie Klug (Toni Collette) used to be the best journalist at a music magazine in Seattle. It was she who discovered Matthew Smith, one of the most influential musicians of his generation. But those days are long gone. Now the magazine is struggling to survive and Ellie's boss Giles (Oliver Platt) is putting the squeeze on her: if she wants to keep her job, she's got to deliver a real crackerjack article. And what better subject to cover than the disappearance of Matthew Smith without a trace. Reluctantly, Ellie agrees to go in search of her ex. Accompanying her is an old friend, wannabe documentary filmmaker Charlie (Thomas Haden Church), who wants to make a movie about Ellie and her search for the former star. But is Matthew Smith even still alive? And if so, why doesn't he want to be found? No easy task for the journalist, especially now that the young musician Lucas (Ryan Eggold) turns her head...

With Lucky Them - In Search of Matthew Smith, director Megan Griffiths has staged a very nice story about love, letting go and music. She mixes humorous moments with some rather quiet, thoughtful ones to create an atmospheric whole, which is carried excellently by Toni Collette and Thomas Haden Church even through the more drawn-out moments. The atmospheric locations in Seattle and the surrounding area (Twin Peaks fans will recognise one of their favourite locations) and the mainly mellow, very catchy soundtrack also contribute to the fact that as a viewer you simply feel at ease and enjoy watching what is basically a rather unspectacular story.

Ellie Klug is a clearly drawn character. Since being abandoned by the love of her life, she has not only lost her passion for music somewhat. She has also lost the ability to love and trust again. That's why she only gets involved in one-night stands. And when things do get a little more intimate, as is the case with Lucas, she (subconsciously) uses every opportunity to nip a happy relationship in the bud. Her demeanor comes across as a bit undercooled or even arrogant at times, but Toni Collette's acting ensures that Ellie always has the audience's sympathies on her side. The same goes for the character of Charlie. He's actually kind of a jerk, but thanks to Thomas Haden Church, you can't help but like him. The two are a great duo, supported very well by Oliver Platt, Ryan Eggold and, in a mini supporting role, Johnny Depp.

It's particularly nice that Griffiths doesn't serve up the emotional moments too obtrusively. The finale in particular comes across as almost subtle, making it all the more beautiful and touching. True, there are one or two questions left unanswered at the end. Still, the final scene makes for a very satisfying conclusion that just makes you happy. Sure, the film isn't exactly spectacular, nor is it incredibly deep. But if you can get into the story and let yourself be ensnared by the engaging atmosphere, you will experience 90 very entertaining minutes of nice entertainment here, which can be warmly recommended to all lovers of films like Can a Song save your Life. Worth seeing!

Picture + Sound: The very clean picture of the DVD pleases with its warm, very coherent color scheme and a decent image sharpness, which only in darker scenes a few minor weaknesses. The sound, which is not unusual for a small comedy like this dominated by dialogue and music, is rather unspectacular. The surround channels are only used very sporadically, but for the most part the tonal action takes place in the front. Since that fits the film and there is at least sporadically some dynamics in the surround area, that is enough on balance fully and completely for a satisfied: Good!

Conclusion:Lucky Them - In Search of Matthew Smith is a nice, charming comedy about love, letting go and music. The very unexciting production convinces with good actors, atmospheric images and a rousing soundtrack. If you like movies like Can a Song save your Life, you shouldn't miss this home cinema premiere. The DVD is technically well realized, the bonus material is not lush, but worth watching. For this, there is a deserved bottom line: recommendable!