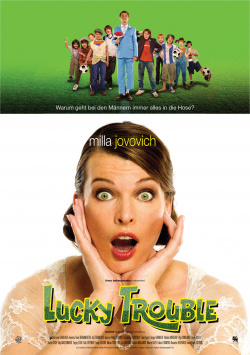 Shy teacher Slava Treteronov (Konstantin Khabensky) has a big dream: to find a publisher for his novel in Moscow. But when he runs into the car of the beautiful, but also somewhat over-excited Nadja (Milla Jovovich), his life takes a whole new direction. Because even though he initially thinks he's so out of his league with his dream girl, Nadja falls in love with the lovable dreamer and soon even accepts his marriage proposal. Everything could be so beautiful. But when Slava, who has returned to his provincial home, wants to travel to Moscow for the wedding, he is condemned to lead the local boys' soccer team to victory in the tournament - only then will he get the passport he needs to leave. Too bad Slava knows absolutely nothing about soccer, and time is running out.

Lucky Trouble is a bit of an odd mix. The extended beginning feels like a romantic comedy, while the scenes surrounding the boys' team are more like an entertaining children's film. It is then this part of the film that works quite well. The soccer scenes are first-rate, with the visual influence of producer Timur Bekmambetov, the director of Watchmen of the Night or Wanted, clearly evident. Fast camera movements, acrobatic tricks, great effects, all make these scenes really cool. The kids are well-cast throughout and the humor is also spot-on in these more kid-friendly moments.

This can't really be said for the romantic part, though. Konstantin Khabensky (Guardians of the Day) does give the slightly naive teacher with a certain charm. But at some point his dorky behaviour and his completely incomprehensible wrong decisions get on the audience's nerves. Milla Jovovich, on the other hand, acts in a good mood and also somehow charming, but too overdone to be funny for even a moment. The same goes for Ivan Urgant, who as Nadya's ex Danja provides some of the film's most annoying moments.

If director Levan Gabriadze had concentrated on directing an entertaining youth film with nice tricks and excellent football interludes, Lucky Trouble could have been really good. But this ungarry mix just drags on too much and is more annoying than it is entertaining. While the second half in particular might appeal to kids 9 and up, whether the same can be said for the rest of this comedy can be rightly doubted.