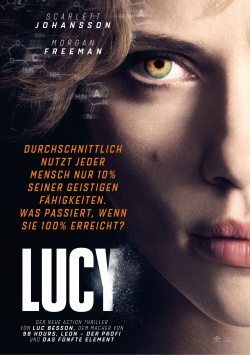 What a nightmare! Actually, Lucy (Scarlett Johansson) just wanted to accompany her boyfriend while he ran a quick errand. But suddenly her arm is chained to a suitcase with explosive contents, her boyfriend is shot in front of her, and she's surrounded by the brutal henchmen of the ruthless Mr. Jang (Choi Min-sik). And if that wasn't bad enough, a bag of a new mysterious drug is sewn into her stomach. This is how she's supposed to get the stuff from Asia to Europe. Lucy decides to surrender to her fate and do whatever Mr. Jang tells her to do. But when one of her kidnappers tries to get into her pants and Lucy resists, the consequences are unexpected: the bag in her stomach tears and the drugs get into her bloodstream. This unleashes unimagined abilities in the young woman, turning her into a deadly lone fighter with almost superhuman powers.

With Lucy, Luc Besson has once again created a strong fighter as the main character after Nikita and Leeloo from The Fifth Element. With Scareltt Johansson he has also chosen a very good actress, the multiple award-winning actress has proven at the latest in The Avengers that she can make quite a good figure as an action heroine. And so Johansson fights her way through Taipei and Paris and makes sure that Lucy - at least for the male audience - is a film for the eye, which also has a certain fun factor.

The script, however, is, to say the least, absolute rubbish. The fact that the story contradicts any form of logic is not the actual weakness, because after all, the film does not want to reflect reality, but rather tell a primarily entertainment-oriented sci-fi story. And whenever Besson restricts himself to that, the whole thing works really well. But whenever the story takes on some pseudo-philosophical tone and then reveals its very own theory of evolution, the script's lack of intellectual depth becomes painfully apparent. If the film didn't try to be more than it is at moments like this, Lucy could have just been a whole lot of pointless fun. But the attempt to give the abstruse story something like depth misses the mark.

The visual effects oscillate somewhere between very good and mediocre, but overall ensure that the film gets a very stylish look, which consoles over many a dramaturgical weakness, especially in the action sequences. The few scenes where Besson throws some pleasantly self-deprecating humor into the mix also lift the entertainment value considerably. While the whole thing still isn't outstanding popcorn cinema even in these well-done moments, the techno amazon is still fun somehow. The cult character of earlier Besson films such as Nikita or L&eacute;on - The Professional, however, one looks in vain here. So if you don't expect a masterpiece and unlike Lucy don't strive to use 100% of your brain capacity in the 90 minutes, but maybe be satisfied with only 3%, you'll get a decent action thriller with light sci-fi elements, a fast-paced car chase through Paris, some nice special effects and a respectable Scarlett Johansson. And for that, despite all its flaws, there's still a clear: Worth seeing!

Cinema trailer for the movie "Lucy (Frankreich 2014)"
Loading the player ...