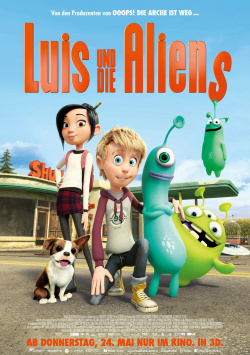 Luis and the Aliens

The 12-year-old Luis has it really not easy. Since his father, a Ufologe possessed by the faith in Aliens, is considered in the whole city as a crackpot, the boy is constantly teased in the school. And now he is to be sent to a boarding school because his father is not considered capable of raising him alone after his mother's death. A terrible situation for the boy, which doesn't get any easier than actually three aliens landing right in front of his nose on earth. Mog, Nag and Wabo can use the help of Luis for a very special mission very well, but soon the whole thing turns into a big adventure, at the end of which Luis has to ask himself whether he really should stay on earth…

There is a very basic problem I have with current animated films: there are only a few films left that have a very special look. However, most of the copper works only diverge from each other cheerfully. People in particular almost always look the same. Creativity and a character of one's own often fall by the wayside. Unfortunately, this also applies to "Luis and the Aliens". At least there's a nice story being told here. It's also not very original and lives from completely overdrawn characters. But for children the adventures of little Luis and his extraterrestrial friends are amusing and exciting.

Mag, Nag and Wabo, who actually only come to Earth to buy a certain product they saw on their space cruise in a shopping channel, are really funny characters - especially when they take on a different shape. Sure, the humor is very simple and sometimes the jokes are a bit flat. But all in all the team around Wolfgang and Christoph Lauenstein has staged an entertaining fantasy adventure, which can even come up with a really exciting finale.

This was a bit too exciting for very small viewers, so that the version, which was shown to the press and some invited children, has been defused a little bit. I would recommend going to the cinema for children from the age of 5. They then experience a lot of fun, some tension and proper animations, which are not on the level of the big brothers of Disney, Pixar or Dreamworks, but can still convince all along the line. Nice conversation with cute jelly aliens and therefore deserves: Worth seeing!

Cinema trailer for the movie "Luis and the Aliens (Deutschland/Dänemark/Luxembourg 2018)"
Loading the player ...