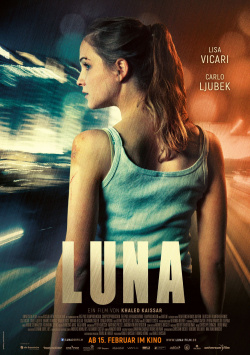 Family vacation in the mountains - for 17-year-old Luna (Lisa Vicari) a real horror. She would much rather stay in the city and party with her friends. But soon she wishes for the supposed family idyll back when her parents and her sister are murdered in cold blood and Luna is hunted down mercilessly by the killers. She gets help from Hamid (Carlo Ljubek), a friend of her father. From him she learns the unbelievable truth: Her father (Benjamin Sadler) was a Russian secret agent who wanted to get out after twenty years to protect his family. Hamid wants to help Luna escape to Moscow to find shelter with her real grandmother. But Luna needs certainty: she has to find out why her family had to die - whatever the cost.

For his directorial debut, Luna, Khaled Kaissar drew inspiration from the true story of a married couple who had worked undercover as Russian agents in Baden-Württemberg for twenty years before their bourgeois facade was exposed and the pair arrested. Their shared daughter had no idea her parents were spies. Similarly, Luna learns in a particularly horrific way that her father was not the man she thought he was. What was just a normal teenage life is suddenly a web of lies, fear and betrayal.

Even in the first act, Kaissar does a great job of developing the story in an exciting and engaging way. The focus is on a girl who is not only targeted by Russian intelligence, but also by the Federal Intelligence Service. She knows her life is in danger, but is also aware that she cannot simply escape without knowing the whole truth. Like Luna herself, the viewer doesn't know who the girl can trust, who are the good guys and who are the bad guys here. Because of this, and also because of some well-executed action sequences, the whole thing gets a decent entertainment value, which consoles over some of the clichés the screenplay tries to put across.

Lisa Vicari plays the titular heroine absolutely convincingly and the rest of the cast also leave a thoroughly positive impression. Especially in the middle part there are a few minor lengths and the story also has to deal with some inconsistencies here and there. But all in all Kaissar has directed a more than solid spy thriller, which maybe doesn't quite live up to its potential, but which offers enough good entertainment to have earned a worth seeing rating.

Cinema trailer for the movie "Luna (Deutschland 2017)"
Loading the player ...