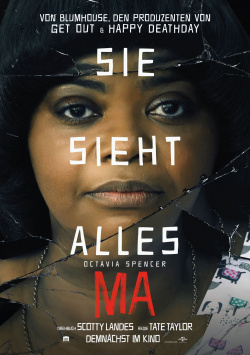 Ma - She Sees Everything

When Maggie (Diana Silvers) moves in with her mom (Juliette Lewis) in their old hometown, she's happy to quickly be accepted into what is arguably the coolest clique in school and receive an invitation to party with them. Too bad they're all underage, so they can't get alcohol. Enter Sue Ann (Octavia Spencer). The loner not only lets the teens talk her into buying them alcohol. She also invites them to use her basement as a party venue - provided the teens abide by some clear rules: No swearing, there must always be someone who stays sober to drive the others home and - this is the most important rule - the rest of the house is off limits! It's a dream come true for the kids and Sue Ann, who everyone calls Ma, finally gets a bit of life. But soon the so friendly hostess shows herself from a completely different side and the casual celebration turns into a solid nightmare.

With Ma, director Tate Taylor (The Help, The Girl on the Train) presents a psychological thriller that can certainly be assigned to the horror genre. You wouldn't have expected that from Taylor, but also from his leading actress Octavia Spencer. But the two are the reason why the film works well despite a rather conventional script. Connoisseurs of the genre quickly realize that Sue Ann is not the cool ma she pretends to be. Worse, you can tell her true intentions and the reasons behind them within the first third of the film. By revealing everything early on, the story deprives itself of the possibility of being able to offer any real surprises.

This, of course, has a small effect on the level of suspense, which never really takes off. And yet, Taylor's staging keeps the action from ever getting really boring. And even if he lets his characters act really dumb in one scene, it hardly makes a negative impact. Taylor makes sure of that with irony sprinkled here and there, the building of an engaging atmosphere, and scenes in which he gives his leading lady the opportunity to play out her evil side to her heart's content.

When Sue Ann goes about her sinister plans with a scowl, it definitely sends shivers down your spine. Octavia Spencer plays the woman between good-heartedness and ice-cold madness just perfectly. Watching her is just fun and makes you forget the weaknesses of the script very quickly. Yes, Ma may not be a landmark of the genre. And given the talented people who worked on the film in front of and behind the camera, the result may even be a little disappointing. But the director and lead actress always manage to turn the tide and make this thriller a piece of horror cinema worth watching!