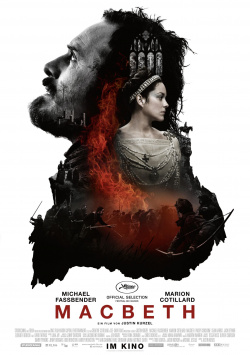 The story is already 400 years old, but has lost little of its power and relevance to this day: after Macbeth (Michael Fassbender), Thane of Glamis and loyal general to King Duncan (David Thewlis), receives a prophecy on the battlefield from three witches that he will soon be King of Scotland, he is persuaded by his wife (Marion Cotillard) to assassinate the king and take the throne himself. This is the beginning of a reign of terror that Duncan's son Malcolm (Jack Reynor) and Macbeth's adversary Macduff (Sean Harris) are determined to put an end to with all their might.

Shakespeare's Macbeth is one of the most performed plays anywhere in the world. But not only on the big and small stages of this world, also in television and cinema the story of the regicide has been adapted countless times. Director Justin Kurzel didn't just want to offer a new interpretation of the well-known original material. He also wanted to make Shakespeare's language, which is not always easy to understand, more accessible to a broad cinema audience without destroying what makes the poetry so special. And that's exactly where his film fails. Visually, there is nothing wrong with this adaptation. There are quite a few mesmerizing images that transport the viewer directly to the grimy battlefield in Scotland or the king's castle. This intriguing imagery is supported by the committed acting of the cast. Especially Michael Fassbender delivers a more than convincing performance that can really leave an impression.

In view of these successful aspects Kurzel would now have had the chance to make the material accessible to a modern audience and just not only satisfy the feuilleton. But instead of really modernizing the dialogues and proving that even today language can be used artfully and lyrically, he sticks to Shakespeare's style, which many find unwieldy. The press booklet gives the impression that Kurzel and his team are well aware of the fact that they have to approach a cinema audience in a completely different way than an audience in a theatre. But in the realization this is not successful. Every word here sounds contrived and theatrical in the worst sense of the word. This would have been acceptable if the script had retained Shakespeare's lyricism. But instead, his style is merely copied and one waits in vain here for the phrases that even a layman knows.

There has been an opportunity here to show that one can tell a classic story through modern means and still maintain some pretension. Instead, it desperately chases after an artistic pretension that just doesn't make the film accessible to a wide audience. The sometimes very nerve-racking soundtrack also contributes to the fact that this Macbeth becomes a real torture especially for viewers who have been dazzled by the fancy trailer and the often (completely wrong) Game of Thrones comparison and expect exciting entertainment cinema.

Surely, also for this adaptation there is an audience. Those who like to be confronted with dialogues in the cinema, where you have already forgotten the beginning of a sentence before it is spoken to the end, who like to lose themselves in artful, but also artificial dramaturgy or who is simply a great lover of Shakespeare's works and their film adaptations, will certainly experience great cinema here. For such viewers, there is then also a: Absolutely worth seeing! But if you really want to see rousing entertainment cinema with accessible characters and dialogues that you can enjoy even without studying literature, then you should give this film a wide berth. Because then clearly applies: Only very conditionally worth seeing!

Cinema trailer for the movie "Macbeth (Großbritannien 2015)"
Loading the player ...