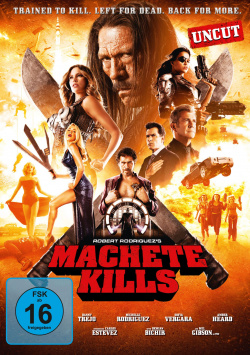 Film: Exploitation action cinema's sleekest hero is back. Machete (Danny Trejo) once again wields his namesake machete in the name of revenge and justice. After the love of his life, Sartana (Jessica Alba), is murdered while fighting a drug cartel, Machete really wants to retire completely. But then he gets a job from the President of the United States (Charlie Sheen), which the ex-Federal Agent accepts in exchange for American citizenship. With the help of an undercover agent posing as Miss San Antonio (Amber Heard), Machete manages to get to cartel boss Mendez (Demián Bichir), who he's tasked with taking out. Too bad he has a nuclear missile pointed at Washington and has connected the detonator to his heart. So Machete must keep the gangster alive and bring him to the U.S. to the only man who can disarm the firing mechanism: the heavily wealthy and eccentric arms dealer Luther Voz (Mel Gibson). He has only 24 hours to do so. No easy task, especially since quite a few pursuers are on his heels, doing everything they can to take Machete out for good...

The career of Machete is just wonderfully absurd. It all started as a fake trailer that was shown between the two films of Quentin Tarantino and Robert Rodriguez's grindhouse double feature. This trailer was so entertaining that it got more attention than the actual main films. And so it was quickly decided to turn the short trailer into a full feature film. This was a deliciously over-the-top brutal fun, which just cried out for a sequel. Now Robert Rodriguez delivers with Machete Kills. While he was able to assemble a very illustrious cast for the first part, he was able to step it up a notch for part 2. Charlie Sheen as the US president, Mel Gibson as a crazy villain with dangerous fantasies of omnipotence, Sofia Vergara as a vengeful madam with a killer bra, as well as brief appearances by Antonio Banderas, Cuba Gooding Jr, Lady Gaga or the now sexy Alexa Vega from the Spy Kids movies raise the fun factor of this sequel significantly.

In terms of action and dirty grindhouse brutality, the film tries to top the first part with particularly bizarre and unrestrained over-the-top ideas. But unfortunately this only works to a limited extent. Was Machete in terms of sex and brutality still extremely uninhibited politically incorrect and in some ways quite original, the whole thing here almost takes on cartoon-like features. As a result, what seemed amusing and wonderfully bizarre in the first film, seems rather silly here. But the worst thing is that Danny Trejo's Machete has lost some of his coolness. The weak script puts sayings in his mouth that threaten to turn Machete into a figure of fun. And the cool Mexican really does not deserve that.

Machete Kills has some very amusing moments and good show values. Watching Mel Gibson as the eccentric villain alone is a ton of fun. And there are also numerous scenes that provide the best grindhouse entertainment to such viewers who liked the first part. But sadly, the positive aspects are embedded in tough moments, wan gags and the surprisingly powerless action scenes. So in the end, the overall picture is rather mixed, which has too few real highlights to offer. And even if the (fake?) trailer for Machete Kills again...in Space looks extremely fun, the anticipation for another Machete adventure after this second part is rather limited. Therefore, only for big fans of the first film absolutely worth seeing!

Picture + Sound: Like Part 1, Machete Kills is also deliberately kept in many scenes in the trashy grindhouse style. Smudges, drop outs and the like. Weaknesses are therefore intentional and therefore do not flow into the evaluation of the image quality. The powerful colors and the overall good image sharpness leave a consistently positive overall impression. The same succeeds with the sound the powerful Dolby Digital 5.1 mix, which provides with some very well implemented surround effects for plenty of movement in the multichannel area. Good!

Extras: As a bonus, there is a worthwhile look behind the scenes (approx. 19:30 min.), as well as eight cut scenes (approx. 19:04 min.) to which, however, no subtitles are available. Nevertheless, for fans the look at these cut or extended and alternative moments is definitely worthwhile!

Conclusion: Machete Kills is not quite as successful as its predecessor. But even if not every gag sits and the action sequences can only partially convince, the film makes alone due to the good-humored ensemble, a wonderfully over-the-top Mel Gibson and some wonderfully absurd scenes enough fun to recommend it to big fans of the first part. The DVD is technically well done and the bonus material includes some nice additional scenes and a making of worth watching. All in all, this is enough to be able to attest the disc quite a recommendable despite some weaknesses in the film.