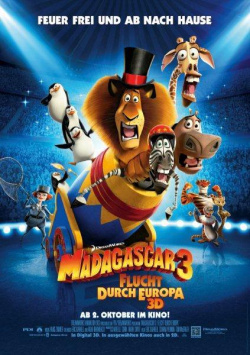 After two successful feature films, which have seen 13 million enthusiastic viewers in Germany alone, a Christmas special and a TV series for the penguins, there was really only one consistent further development for the Madagascar franchise: a cinema sequel in sleek 3D. And it's finally coming to our cinemas after a hugely successful triumphant run through cinemas abroad.

In Madagascar 3 - Escape Through Europe, lion Alex (voiced by Jan-Josef Liefers in the German version), zebra Marty (Rick Kavanian), giraffe Melman (Bastian Pastewka) and hippo lady Gloria make one last attempt to finally get back to the zoo in New York's Central Park. To do so, they first have to find the penguins again, who have absconded to Monte Carlo. From there, they are supposed to take a plane back home. But of course everything goes wrong that can go wrong and soon the animal friends, pursued by the merciless animal catcher Chantel DeBois (Susanne Pätzold), end up on the train of a travelling circus. But here the zoo animals are not at all welcome. The new arrivals are a thorn in the side of Russian tiger Vitaly in particular. Only when they claim to be famous circus animals themselves, who could create the most spectacular circus act ever with their new companions, are Alex, Marty, Melman and Gloria accepted into the circle of performing animals. But this, of course, is far from solving the problems - on the contrary...

Madagascar 3 - Escape through Europe actually does everything right as a sequel. On the one hand, the fans are offered exactly what they want to see, on the other hand, there are enough innovations that the whole thing does not seem like a loveless repetition of the first two films. The beloved characters are still the same, their quirks are still the same and also some of the gags that already worked well in parts 1 and 2 are reheated here in a slightly different form. But the new setting in which the whole thing takes place, namely the travelling circus roaming through Europe, gives the story a fresh coat of paint and new comedic potential, in which the makers then also draw from the full. Some very well used 3D effects are the positive icing on the cake. So an all-round success?

Not quite, because as amusing as some scenes are and as nice as many of the new characters are, the humor seems in many moments too overdone and the pace too hectic to achieve more than a short-term entertainment effect. Especially the car chases with the completely overdrawn Chantel DeBois have an arguably undercooled video game character that lacks any charm. Admittedly, there are always extremely funny and also clever ideas, about which you can amuse yourself deliciously even as an adult viewer. But in the long run, the constant writing, falling or slithering, which seems to be an integral part of all animated films, especially since the introduction of 3D, gets on your nerves - at least if you expect more from animated films than a collection of fast and overly colorful action sequences.

But if you like the humor of the Ice Age movies, if you could already laugh about the first two Madagascar movies and if you just can't get enough of the capers of the penguins, you will have a great time with the third part - especially since it is much better and more original compared to the second movie and qualitatively comes much closer to the first part again. For me personally, the chases were just too tiring in the long run and the dance scene at the end, which is almost obligatory for animated movies, I just find annoying and completely unimaginative by now. But despite these criticisms, I must also say that I was very amused in many moments and that I am convinced that especially younger Madagascar fans will have their bright joy here, which is why it is still enough for a worth seeing in the end.

Cinema trailer for the movie "Madagascar 3 - Escape through Europe (USA 2012)"
Loading the player ...