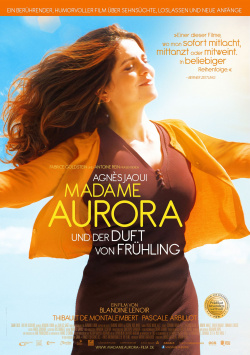 Madame Aurora and the Scent of Spring

Actually, Aurora (Agn&egrave;s Jaoui) can be satisfied with her life: she has two wonderful daughters, she is happily single and she can keep the small family afloat with her job. But then everything comes at once: her eldest daughter gets pregnant - which turns Aurora into a grandmother. Her new boss is a creep, so she quits her job. And then menopause makes her body go crazy, too. But just when Aurora seems to despair of getting older, she meets her old childhood sweetheart Christophe (Thibault De Montalembert) again. Perhaps there is a second chance for them to have a happy ending?

Madame Aurora and the Scent of Spring is once again one of those films that can be described as a typical French comedy. A nice treat that hurts no one, but that also offers absolutely nothing new. There is a lot of wit, a charming main character, some romance and also a little pinch of social criticism - you want to show some relevance, after all. The 90 minute running time flies by and you never get bored. But in the end, the film is also quickly forgotten, as it merges with the many similar works that have flooded the cinemas in recent years without any real standout features. Whether it was Madame Aurora and the Scent of Spring or Madame Christine and Her Unexpected Guests or The Elegance of Madame Michel or whatever Madame, it's really hard to remember now with this less than profound production - though it doesn't matter too much.

Because what the film wants to achieve, it manages very well: it can offer its target audience 90 minutes of light escape from reality and gives them a joyful smile at the same time. Much can be contributed to this by lead actress Agn&egrave;s Jaoui, who thankfully doesn't play her role in a hysterically over-the-top manner, as has unfortunately been seen far too often in French cinema in the recent past. She acts very authentically, so that you just have to like her as a viewer. And that's exactly why it's understandable why Christophe is rather sceptical about a further relationship with her. Sounds illogical, but it's explained by what he reveals to Aurora as his reasoning.

Madame Aurora and the Scent of Spring is, on balance, a likeable film for all lovers of light comedy fare from France. Especially for viewers 40+, the film is really recommendable, even if it can't really leave a lasting impression. But sometimes it's just enough if a movie offers completely unexciting, entertaining and amusing entertainment only during its running time, isn't it? And this Madame delivers convincingly. For this there is the deserved: Worth seeing!

Cinema trailer for the movie "Madame Aurora and the Scent of Spring (Frankreich 2017)"
Loading the player ...