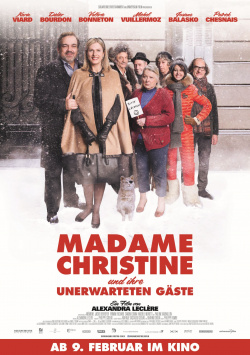 Madame Christine and Her Unexpected Guests

The residents of a bourgeois Paris apartment building are less than pleased when, after a prolonged cold snap, the government decides that all apartments with too few residents for a certain square footage must take in poorer, homeless people. Christine (Karin Viard) and her self-centered husband Pierre (Didier Bourdon) try everything to avoid having to take anyone into their dream apartment. And they are not alone in this. Even their oh-so-liberal neighbors (Val&eacute;rie Bonneton and Michel Vuillermoz) seem to want to shirk their do-gooder duty. And the plan does seem to be working, until Madame Christine, plagued by the daily grind and the whims of her husband, is troubled by her conscience and makes an unexpected as well as drastic decision.

Madame Christine and Her Unexpected Guests attempts to confront the issues of social justice, rent-seeking, homelessness, xenophobia, and migration with a great deal of humor. Sometimes this is actually funny and a little bit biting, but for long stretches it is too tame and too clichéd to be really convincing. One thing, however, director Alexandra Lecl&egrave;re to be credited for: Even though many of her characters are drawn in a clichéd manner, they are pleasantly complex. The leftist demonstrating for equality and justice turns out to be a hypocrite, and the snobby, racist Pierre discovers his do-gooder side. And among the socially disadvantaged homeless and migrants, there are wonderful people as well as black sheep who are just taking advantage of the gullibility of their short-term housemates. Lecl&egrave;re at least in this way tries to avoid the usual black and white painting, which gives the story some thoroughly surprising and also charming moments.

However, in the end you are left with a relatively unbalanced picture. If some aspects are implemented in a pleasingly enigmatic way, other moments fall shockingly flat. One gets the feeling that Lecl&egrave;re trying to achieve too much, and that it is precisely these ambitions that have ultimately failed her. On the one hand, she is trying to denounce grievances and stir up important discussions. That's commendable, but unfortunately it doesn't work because at the same time she shies away from using the necessary vicious bite at crucial moments. This becomes apparent, for instance, with the concierge lady, played wonderfully bitterly by Josiane Balasko (Welcome to Hotel Mama). This character is built up to be so wonderfully evil, only to degenerate into an almost laughable cliché. Nicely meant, no question, but just extremely clumsily implemented.

Madame Christine and Her Unexpected Guests has good ideas and nice moments, but at the same time is the best proof that this is far from enough to make a good movie. If you expect a French welcome to the Hartmanns, you will be disappointed for sure. Therefore, there is only one: Still worth seeing with some reservations!

Cinema trailer for the movie "Madame Christine and Her Unexpected Guests (Frankreich 2015)"
Loading the player ...