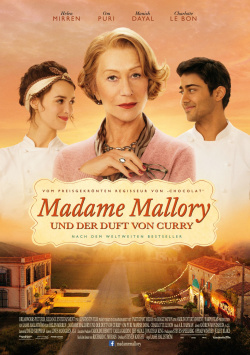 Madame Mallory and the Scent of Curry

Ever since he was a little boy, Hassan Kadam (Manish Dayal) has loved exploring the world of cooking and spices with his mother. It soon became clear that the boy had a very special talent and would one day run the family restaurant. But now Hassan's mother is dead and his family has lost almost everything. With the few belongings they have left, Hassan, his father (Om Puri) and his siblings have to flee India in the hope of starting a new life in Europe. And they are to succeed in doing so in a small village in the south of France, of all places, directly opposite the Michelin-starred French restaurant run by Madame Mallory (Helen Mirren). But she is not very enthusiastic about their new neighbours. Not because she sees the Indian temple of pleasure that the Kadam family wants to open here as serious competition, but because she fears for her reputation. And so a real feud quickly develops between Le Saule Pleureur and Maison Mumbai, of which only Hassan and Marquerite (Charlotte Le Bon), Madame Mallory's sous-chef, are unimpressed. When the undercooled restaurant chef recognizes the talent of her young neighbor, events take a surprising turn.

With this film adaptation of the novel Madame Mallory and the Scent of Curry by Richard C. Morais, director Lasse Hallström has once again served up a piece of feel-good culinary cinema of the particularly tasty kind after Chocolat. He often indulges in images that are so appetizing that you will certainly hear your stomach growling in the cinema. So you should definitely not watch this movie hungry, because otherwise the desire for the delicacies prepared in the movie could turn the actual pleasure into a real ordeal. Apart from that, however, there is little to criticize about this charming feel-good film.

Sure, Lasse Hallström's clash of cultures has not turned out to be particularly profound and uncomfortable aspects such as xenophobia are only touched upon in passing. And somehow all the people here are a little too nice to be really believable. But honestly: sometimes an overdrawn, soft-spoken escape from reality is really good. And when it's presented in such a charming, humorous and endearing way as by Lasse Hallström, then the call for more realism should really fall silent quickly. Because if you buy into the fact that Madame Mallory and the Scent of Curry is a beautiful cinematic fairy tale that just wants to make its viewers happy (and hungry), then it's also extremely enjoyable to lose yourself in the quaint world of Saint-Antonin-Noble-Val.

The actors are all quite wonderful, led by a customarily commanding Helen Mirren and a wonderfully quirky Om Puri as the stubborn Indian head of the family. In direct comparison to Manish Dayal, who is allowed to show different facets of his character, Charlotte Le Bon remains a little pale and the spark between the two doesn't really want to ignite. But Hallström's production is so full of warmth and romance that this is easily compensated.

Yes, Madame Mallory and the Scent of Curry may be dramaturgically a bit superficial and clichéd. Yes, Lasse Hallström's production thrives primarily on images of manipulative beauty. And yes, originality looks different. But all of that is really secondary in light of the immense charm the film exudes. So if you simply want to experience two hours of pure feel-good pleasure and expect nothing more than to feel emotionally satiated and happy afterwards, then you definitely shouldn't miss this beautiful work. Absolutely worth seeing!

Cinema trailer for the movie "Madame Mallory and the Scent of Curry (USA 2014)"
Loading the player ...