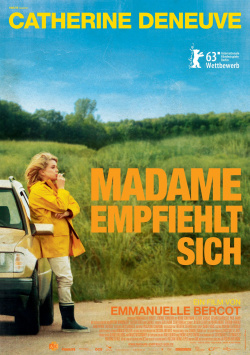 At first glance, former beauty queen Bettie (Catherine Deneuve), now in her early 60s, leads a very pleasant life in a small Breton village. She runs a small restaurant and has a passionate affair with an attractive man. But Bettie is anything but happy. The restaurant is in financial trouble and her lover has chosen a younger woman. And at some point it's too much for the dignified madame: she recommends herself, simply gets into her car and drives off with no particular destination in mind. Her journey eventually leads her to her grandson Charly (Nemo Schiffman), whom Bettie is supposed to bring to his grandfather Alain (G&eacute;rard Garouste). On the long ride, Bettie is confronted not only with her past, but increasingly with her uncertain future.

Meanwhile, 70-year-old Catherine Deneuve, the grande dame of French cinema, can look back on a career spanning more than five decades. No reason for the multi-award-winning actress to be relegated to the sidelines. And so she is back in top form in her latest film Madame recommends herself. As an aging beauty queen who realizes that it's never too late to make a completely fresh start, Deneuve is undoubtedly the best thing about an otherwise rather unspectacular work. No question, director and screenwriter Emanuelle Bercot (Student, 19, Looking.) tells what is, at its core, a very nice story. Filled with a few very successful moments, sometimes full of poetic melancholy, then again full of restrained humor, the action immersed in beautiful images is for lovers of the rather quiet French film.

But there is also no denying that there are scenes that somehow seem trivial and that especially the mother-daughter conflicts come across a little too contrived. Moreover, especially the supporting characters lack depth, which becomes noticeable in the last third by a certain dramaturgical superficiality. As lovingly as the character of Bettie is worked out and as beautifully as the relationship between her and little Charly is built up, the liberation of a woman in her prime can't really grab you towards the end. The movie is still worth watching just because of the beautiful pictures. But only Catherine Deneuve really leaves a lasting impression.

And therefore: Who appreciates small, unspectacular films with partly quite weird characters and quiet, somewhat melancholic comedy and generally has a soft spot for the French art house, can also be recommended to Madame recommends itself. Worth seeing

Cinema trailer for the movie "Madame recommends herself (Frankreich 2013)"
Loading the player ...