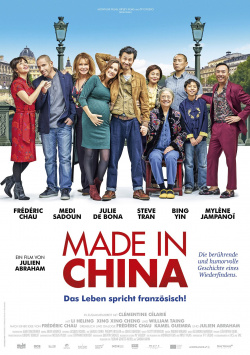 The young photographer Fran&ccedil;ois (Fr&eacute;d&eacute;ric Chau) lives a contented life in Paris with his girlfriend Sophie (Julie de Bona) - and it gets even nicer as Fran&ccedil;ois learns that he is soon to become a father. But after the anticipation comes a realization for Fran&ccedil;ois that now is the time to finally face his Asian roots again. After all, he has been out of touch with his father and the rest of his family, who live in the Chinese part of Paris, for years. With the support of his best friend Bruno (Medi Sadoun), Fran&ccedil;ois ventures back to Chinatown. He is welcomed with open arms by aunts, uncles, nieces and nephews, but his father only gives him the cold shoulder. Now Fran&ccedil;ois realizes that he must jump over his own shadow if he is to succeed in winning back his father's love. But this is more difficult than expected.

With his role as Chao in the two Monsieur Claude films, Fr&eacute;d&eacute;ric Chau has also become known to a wider audience in Germany. Now, in Made in China, the Vietnamese-born actor gets to show that he can carry a comedy on his own. Well, not quite alone. Because here too he gets support from his Monsieur Claude colleague Medi Sadoun, who as Bruno is primarily responsible for the comedy aspect of the film. While the film is primarily light-hearted entertainment in other respects, it does have some serious moments, focusing on Fran&ccedil;ois cultural rift and difficult relationship with his father.

Thereby, some interesting and socio-politically extremely topical points are touched upon. But unfortunately, like the rest of the story, it all remains too much on the surface. Because the script that Chau co-wrote with director Julien Abraham, despite some nice ideas, moves too much on well-trodden paths. For example, there is a moment when the reconciliation between father and son seems to be within reach. What happens then, however, is already so far predictable that one is simply disappointed as a viewer that the makers have actually gone this unimaginative cliché way.

A few amusing moments, the charming actors and the fact that you finally get to see Paris here from a slightly different side, makes Made in China despite some weaknesses in the end quite entertaining and entertaining. But if you're expecting a really funny culture clash comedy with a biting wit in the style of Monsieur Claude, you'll be disappointed by this very well-behaved, predictable movie. All in all a clear case of: Worth seeing with cutbacks!

Cinema trailer for the movie "Made in China (Frankreich 2019)"
Loading the player ...