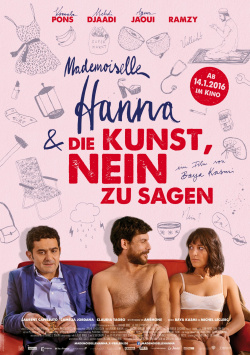 Miss Hanna and the Art of Saying No

Thirty-year-old Hanna (Vimala Pons) and her brother Hakim (Mehdi Djaadi) couldn't be more different: while she, regardless of her cultural and religious roots as a half-Algerian, leads a very free-spirited, open-hearted life in Paris, Hakim has chosen a very traditional path as a devout Muslim. But the siblings have one thing in common: they have inherited from their parents the inability to simply say no sometimes. This is particularly difficult for Hanna, who as head of the human resources department has to fire employees from time to time. But Hanna always finds a way to sweeten this difficult step for those who have been made redundant. But then she meets the doctor Paul (Laurent Capelluto) and with him a man who seems to love her as she is. But then Hakim needs her help - and this not only intensifies their conflict with each other, but also tears open an old wound that both siblings would be only too happy to keep closed forever.

After their first collaboration on the wonderful The Name of People, Baya Kasmi and Michel Leclerc have swapped roles this time around. If he was allowed to direct The Name of People while she was only involved in the screenplay, Kasmi took a seat in the director's chair for Mademoiselle Hanna and the Art of Saying No. Even though there is some thematic overlap between the two films, the change in direction means that they each have their own distinct signature. What they have in common, however, is that they tackle very serious subjects with a great deal of humour and irony.

As the daughter of an Algerian Muslim and a Frenchwoman, Kasmi has admittedly been able to incorporate a great deal of her own experience into the film. But a novel by Philip Roth about two very dissimilar Jewish brothers from New York also served as a source of inspiration. Based on this background, a story is told about how differently young people in particular deal with their cultural or religious background. It is a story about self-assertion, finding one's identity and adapting, but also about tolerance and the power of love.

The film's sometimes very offbeat humor comes primarily from the inability of all family members to be able to say no. However, this inability also leads to some of the saddest scenes, which the film isn't exactly stingy with either. Especially the flashbacks, which give us an idea of what Hanna had to experience as a child and what Hakim had to witness, as well as how much Hakim later had to suffer from his sister's very permissive and free-spirited behavior, definitely hit the stomach. The fact that the many lighter, absurd-humorous moments don't seem completely out of place, but instead form a harmonious overall picture, is one of the film's great strengths.

However, the staging sometimes seems a bit jumpy. There is no real connection between individual scenes, which at some points makes the narrative flow feel very choppy and creates an episodic feel. However, the refreshingly uninhibited acting of the cast and some truly beautiful snapshots are able to make up for this weakness, at least to a large extent. Overall, Mademoiselle Hanna and the Art of Saying No manages to tackle many of the issues currently preoccupying our society in a very original, tongue-in-cheek way, without diminishing its relevance in the process. The film's sometimes stark, yet always coherent mix of comedy and drama is sure to make it difficult to watch for some viewers. But if you already liked The Name of the People and generally have a soft spot for French arthouse comedies of a slightly different kind, you're guaranteed to fall for this film's charms. Worth seeing

Cinema trailer for the movie "Miss Hanna and the Art of Saying No (Frankreich 2015)"
Loading the player ...