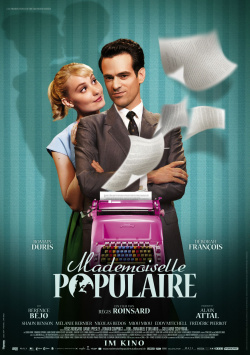 From the moment Rose (D&eacute;borah Francois) first put her fingers to the keyboard of a typewriter, she has had only one very big dream: to escape her simple small-town life and her job at her father's corner store and become the secretary to a successful businessman. When she learns that a job is available in a nearby town, she secretly applies to the handsome Louis Echard (Romain Duris). But the competition is fierce; after all, secretary is the dream job for women in the 50s par excellence. But although Rose is actually completely untalented, Louis is extremely impressed by her speed. Rose gets the job and after she has caused a lot of chaos in the office, Louis makes her another proposal: he wants to train her for the regional speed writing competition. Rose accepts the offer, unaware that it will soon change her life completely.

With Mademoiselle Populaire, R&eacute;gis Roinsard has directed a harmless but genuinely charming romantic comedy that, in its best moments, evokes nostalgic memories of the screwball comedies of the 1950s. Roinsard got the inspiration for his feature debut from a documentary about the typewriter, which included a short clip from a speed typing contest. Since there were hardly any real documents about these competitions, the young filmmaker's research had to be limited to single internet videos, in which, however, it became clear that these competitions were indeed real crowd pullers in former times.

With a very affectionate set, Roinsard revives the 50s in a very authentic way, whereby his film does not seem dusty but very modern due to editing and staging. It is this mixture that gives the film its special flair. With D&eacute;borah Francois, the director then also found the perfect casting for the female lead. Francois perfectly portrays the transformation from shy country girl to confident mademoiselle populaire in an endearingly charming way. Roinsard wanted her to be a cross between Audrey Hepburn, Shirley MacLaine and Marilyn Monroe, combining comedic timing, naturalness and sex appeal. And Francois has more than convincingly fulfilled that wish.

At her side, Romain Duris once again demonstrates his flair for comedic timing, though as the extremely dogged and introverted Louis, he's not necessarily the most likeable character. But thankfully, the staging is spot-on and his performance charming enough to make the audience want something to develop between Louis and Rose. Roinsard builds this romance nicely into the success story of Rose, a fast-tipper, so that it's omnipresent but doesn't dominate the film with over-the-top kitsch.

Although the humor is a bit too over-the-top at times and the acting of the cast could have been more restrained in some moments, the bottom line is that Mademoiselle Populaire is a genuinely likeable, nice film that allows viewers to just completely switch off for nearly two hours and be lulled by comforting nostalgic warmth. If you appreciate French entertainment cinema and would like to take a trip back to the 50s, you definitely shouldn't miss this charming comedy. Worth seeing