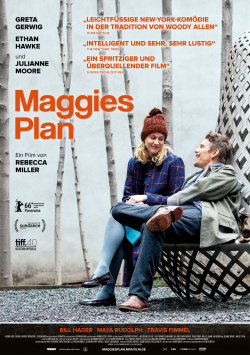 Maggie (Greta Gerwig) is single. She just can't find a man who will put up with her for longer or who matches her high ideals. That wouldn't be a big deal if Maggie didn't have one really big wish: she desperately wants to have a baby. Fortunately, she doesn't need a man to do it anymore; a sperm donation will do just fine. Maggie is ready to go through with this plan when John (Ethan Hawke) enters her life. There's a huge spark between the two, so much so that John leaves his domineering wife Georgette (Julianne Moore) for Maggie to start a new life alongside his younger girlfriend. IT all looks like a classic happy ending - but three years later, reality has caught up with the couple. True, Maggie is now the proud mother of a little girl. But standing in her way of perfect happiness is John, who would rather work on his novel than his little family. And so Maggie needs a new plan to get rid of John.

Although the story's approach is very refreshing, the film itself offers little that's new. This is evident by the fact that every scene feels reminiscent of another work, whether by Woody Allen, Noah Baumbach or Jennifer Westfeldt (Friends with Kids). But Miller draws the characters with such charm that any nascent D&eacute;j&agrave;-vu feeling is nipped in the bud. In addition, the cast spreads an enormous amount of good cheer that it's almost impossible not to come out of this film in a good mood.

What also makes this film successful is the fact that, while it feels like an anti-thesis to standard cinematic romances, it's still exceedingly romantic at its heart. Rebecca Miller not only succeeds in making the audience laugh with intelligent wit, but some genuinely beautiful moments hit the audience right in the heart. Granted, Greta Gerwig plays a role again here, as we've seen from her several times now. And the ending is nice, but also a little too contrived. But even if you could grumble about such aspects, the movie has one clear strength: it's just fun. If you have a soft spot for entertaining, likeable arthouse comedies from America and don't mind little flaws and clichés, you should definitely go to the cinema and see if Maggie's plan works: worth seeing!