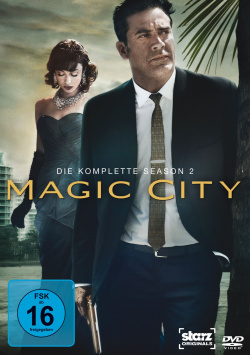 Content: Miami Beach, late 1950s: Ike Evans (Jeffrey Dean Morgan), owner of the luxury Miramar Playa hotel, has been jailed on suspicion of murder. While his wife Vera (Olga Kurylenko) desperately tries to get him released, his silent partner, mob boss Ben The Butcher Diamond (Danny Huston), must fear that Ike won't stand up to the pressure behind bars and will make a deal with district attorney Jack Klein (Matt Ross). To get him out of the way, Ben contacts his boss Sy Berman (James Caan) in Chicago to take on the task. When Ike is fired, he does everything he can to get away from Ben once and for all. To do so, he makes contacts in Cuba, which in turn puts a strain on his friendship with his hotel manager Victor Lazlo (Yul Vázquez). Ike is also concerned about his sons. While Stevie (Steven Strait) continues his dangerous affair with Ben's attractive wife Lily (Jessica Marais), Danny (Christian Cooke) decides he wants to work for Klein, of all people. All of this could jeopardize the future of the hotel and destroy Ike's big dream forever. But when Miami's gambling law is about to be passed, the cards could be reshuffled altogether...

Magic City consistently continues its style in its second (and, unfortunately, also final) year. In addition to the simple, yet exciting dramaturgy, the series relies on its mixture of suspense, lots of sex and a little violence. Coupled with a stylish 50s décor and a convincing cast, which is supported in the second season by the great James Caan, the stories around the Miramar Playa offer enough entertainment and fodder for the eye. This is not quite enough to be able to play in a league with obvious role models such as Boardwalk Empire or Mad Men. But first-class material for series junkies is offered here all the time.

Neben the continuation of the events from the first season, the creators try to give the series through Ike's relations to Cuba or Ben's trip to Chicago also a few new impulses. Since this also changes the dynamics of the characters among themselves, these attempts can be considered quite successful. Admittedly, this doesn't create any real depth. And still, many of the characters are drawn in a very stereotypical way. But that doesn't change much about the high entertainment value of the series. Because a gangster series needs classic characters like a really good villain. And if the villain is extremely overdrawn, but as wonderfully nasty as Danny Huston's Ben Cross, then the viewer is not really bothered by such clichés. The same of course goes for the anti-hero (Ike) or the femme fatale (Lily), who also work very well in this series.

The season ending brings the events to a neat conclusion on the one hand, but at the same time also provides the foundation for new events that could have been fleshed out in a third season. It's a shame that this won't happen, but it's unlikely that the Miramar Playa will have to be said goodbye to entirely. A movie version of Magic City, in which some of the series actors as well as Hollywood celebrities like Bruce Willis and Bill Murray are supposed to star, is already in development and is supposed to be set in the 1960s. So it will be interesting to see if there will be a reunion with Ike, Vera, Ben and Co. after all. Until then, however, is definitely worth the handle to this exciting, entertaining second season, which has earned a very clear Sehenswert!

Picture + Sound: Compared to the first season has changed here nothing. The picture quality of the DVD once again does absolute justice to the very good 50s look of the series. The coloring looks very authentic, with just the warm tones come powerfully to the fore. The image sharpness is at a very good level and even in the darker scenes there is hardly any visible loss of quality. The audio is in a coherent Dolby Digital 5.1 mix, though strong surround moments are rather scarce here. It's more the ambient noises and more subtle sound effects that ensure some life comes to the multi-channel. Otherwise, the dialogue and great soundtrack set the tone, with both sounding well-matched from the speakers. Good!

Conclusion: Magic City says goodbye to its fans with a good, very entertaining and usual stylish second season. Unfortunately, the finale of the season is also the (too early) end of the series, which would have had enough potential for a few more exciting seasons. Despite some clichés, dramaturgical hangs and too stenciled characters, a very high entertainment value prevails, which is intensified by the engaging visual style, the good music and the convincing actors. The DVD presents the series in good picture and sound quality. The extras offer standard promo material that has some quite watchable moments. For this, there is a very clear. Recommended