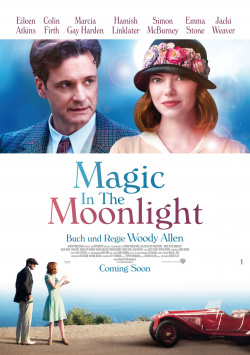 Magic in the Moonlight

Almost everyone knows the most famous magician of his time, the Chinese sorcerer Wei Ling Soo. But hardly anyone knows that behind the magician's mask is the Briton Stanley Crawford (Colin Firth). Stanley is not only a master of deception, he also has the great talent to expose alleged spiritualists as charlatans. After all, as a great illusionist, he knows all the tricks for faking contact with the spirit world. When he is asked by his longtime friend Howard Burkan (Simon McBurney) to prove that the young fortune teller Sophie Baker (Emma Stone) is a fraud, the arrogant Stanley believes he has an easy time with the American. But not only has the entire Catledge family - most notably son Brice (Hamish Linklater) - already succumbed to the psychic's charms. Sophie also seems to actually have some tricks up her sleeve that the magician doesn't yet know. And it doesn't take long before he himself sees the alleged fraud with different eyes. Is there perhaps some real magic in the air here after all?

With Magic in the Moonlight, Woody Allen returns to the realms of lighter comedy fare after the drama Blue Jasmine. The story he tells is rather simple and predictable. But that doesn't change the fact that it's really charming and told in a very charming way. It's especially the sparkling dialogues that make the movie so enjoyable. The dialogue duels Stanley and Sophie have are especially fun, which is intensified by the good-humored acting of Colin Firth as the arrogant egomaniac and Emma Stone. Add to this the wonderful locations in France, through which the audience can perfectly escape from the grey everyday life and is filled with a relaxing lightness.

There is no question that the film is a lot of fun in its own way and will especially entertain lovers of Woody Allen's younger comedies. However, it must also be said that Magic in the Moonlight is not necessarily among the best work the director has delivered in recent years. The script and staging of this light summer comedy just can't come close to Midnight in Paris. Especially since especially in the last third, despite the rather short running time, some lengths have crept in, through which it is revealed that the story is a bit thin overall.

But overall Woody Allen manages quite well to compensate for these small weaknesses with a pleasantly light, playful direction. When the film in its best moments exudes the flair of classic screwball comedies, then you as a viewer are so infected by the lively mood that you are only too happy to overlook slight dramaturgical hangs. And the very nice ending makes up for every moment in which you had the feeling that you had to fight against boredom.

Even though Magic in the Moonlight may not belong to Allen's best works, this light comedy spreads a good mood and hits you right in the heart at the end. As a result, the viewer leaves the movie theater with a big smile on his face. And that is reason enough to be able to attest this film an absolutely worth seeing

Cinema trailer for the movie "Magic in the Moonlight (USA 2014)"
Loading the player ...