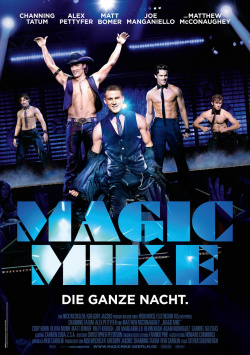 There are few directors who display such versatility as Steven Soderbergh does. Whether it`s fun popcorn cinema (Ocean`s 11-13), sophisticated arthouse dramas (The Good German), cryptic entertainment (Erin Brokovic, The Informant) or experimental science fiction (Solaris), the filmmaker almost always expertly avoids repeating himself with his wide genre range. And that's exactly what he's managed to do with his latest, Magic Mike. After the great epidemic thriller Contagion and the unusual action thriller Haywire, Soderbergh now presents a drama from the world of male strippers spiced with some humor and romance.

Channing Tatum plays here the successful stripper Mike, who takes the young Adam (Alex Pettyfer) under his wing. While Adam becomes more and more intrigued by finally making good money and being adored by countless women every night, Mike flirts with the idea of turning his back on that part of his life. Although his boss, club owner Dallas (Matthew McConaughey) has big plans for his most successful stripper, Mike dreams of making a living designing his own furniture. When he meets and falls in love with Adam's sister Brooke (Cody Horn), his mind seems finally made up...

In some moments, Magic Mike is reminiscent of Paul Thomas Anderson's Boogie Nights. However, Soderbergh's behind-the-scenes look at the stripper business doesn't have the depth or bite that Anderson's Oscar-nominated drama excelled at. That's not a bad thing, though. Because even though the film strives for authenticity and a certain amount of dramatic depth, the focus is clearly on having a good time. Magic Mike aims to be fun on a high level, and for long stretches the film succeeds very well. Based on the experiences of lead actor and producer Channing Tatum himself as a 19-year-old stripper, the film touches the dark side of the business, but does not want to be a revealing reckoning, but just a comparatively light entertainment film.

Thanks to the good script and the convincing actors, especially a wonderfully greasy Matthew McConaughey, Soderbergh succeeds convincingly to show that you can serve light entertainment but also at a high level. Although some aspects of the story are treated too superficially - such as Mike's stripper colleagues, who all seem to be quite interesting characters - but overall the film leaves a very positive impression and a lot of good humor. In the U.S., this was rewarded with such a high box office result that already now loud about a sequel to this low-budget production is thought.

So Magic Mike is overall not only another testimony to the versatility of Steven Soderbergh, but also that with little money and charmingly told stories really great cinema entertainment can be conjured. Absolutely worth seeing