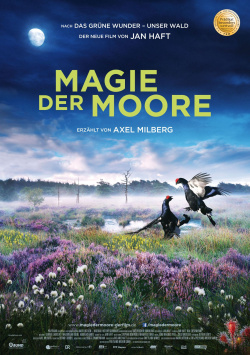 Magic of the Moors

After bringing us closer to the wonder of the forest in his last film, Jans Haft takes us into the magic of the moors in his latest work. In wonderful pictures he presents this fascinating habitat and its inhabitants. Using the latest slow-motion and time-lapse techniques, he created magnificent shots in over 500 days of shooting, which can unfold their full splendour on the big screen. However, the film is a little tough at the beginning. Here it becomes noticeable that there have simply been too many animal and nature documentaries in recent years and that the market is actually oversaturated. But the moment you realize as a viewer how important the moor is for our entire environment, how versatile its manifestations are and how diverse the flora and fauna in the various moorland landscapes are, you are again gripped by this documentary.

Whether you get to watch carnivorous plants at work up close, accompany cranes feeding their young, roam the moorland with wolves and bears, or get to know mosses whose spores literally explode - the elaborate camera techniques and enormous patience of the crew made it possible to capture footage at a total of 80 filming locations in Germany, Finland, Sweden, Denmark, Norway and the Czech Republic, which quickly make you forget the somewhat long-winded beginning. The commentary by Axel Milberg, which is not always necessary but very pleasant, fills the rush of images with a lot of exciting information.

For example, the viewer learns about the dramatic impact that the draining of peatlands has on the world's climate and how easy it is in principle to restore peatlands. One learns about the variety of creatures that have adapted perfectly to the special environment of the moors and have found an important habitat here, which man is taking away from them more and more. But even though the film hints at and definitely raises the moral forefinger, it never comes across as too doctrinaire. Like The Green Wonder - Our Forest, Magic of the Moors is not only a beautiful film, but also an important one that conveys the necessity of nature conservation in a fascinating way. A technically as well as dramaturgically first-class documentary that not only nature lovers should definitely not miss. Worth seeing

Cinema trailer for the movie "Magic of the Moors (Deutschland 2015)"
Loading the player ...