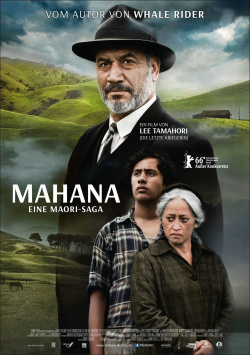 With a stern hand, Tamihana Mahana (Temuera Morrison) rules over his family in 1960s New Zealand. Only his harshness, iron will, and deep rootedness in ancient Maori traditions has allowed him to provide a fairly prosperous life for his children and grandchildren. After all, the Mahana clan is one of the best and most successful sheepherders in the North Island. And therefore, despite some unpleasant rules, there is no reason to rebel against Tamihana. Only 14-year-old Simeon (Akuhata Keefe) has a mind of his own and sometimes talks back to his grandfather. Of course, the strict patriarch doesn't like this at all, which is why he treats the boy with particular severity. When one day an argument between the two escalates and Simeon's mother sides with her son, the family's proud façade begins to crumble and a long-kept secret is revealed as a result.

With Mahana - A Maori Saga, director Lee Tamahori returns to his roots after his time in Hollywood (James Bond - Die Another Day). Based on the autobiographical novel Bulibasha: King of the Gypsies by Witi Ihimaeras (Whale Rider), the New Zealander has staged a poignant family story, which can convince with a poignant story and a no less rousing visual language. Certainly, dramaturgically little new ground is broken here. If you've seen any family epic before, you'll rediscover a lot of familiar elements here. But Tamahori knows perfectly how to wrap up the familiar set pieces in such a way that you are absolutely captivated from the first to the last minute.

Particularly in the scene where Simeon's grandmother reveals the terrible family secret, Tamahori demonstrates extreme finesse. This sequence could easily have been striking. But he executes it so artfully that it is extremely stirring and touching precisely because of what it doesn't show. It is such elegantly staged moments that make this film so successful, despite a certain predictability. The great actors, the beautiful music and some small scenes full of refreshing lightness also contribute to an all-around positive overall impression in the end.

You could accuse the film of seeming a little stale. But for this story, the very traditional and truly timeless storytelling Tamahori has chosen lends itself perfectly. With his rather small film compared to his Hollywood works, he has created quite great cinema in every respect, which visually and dramaturgically is simply made for the big screen. If you like epic narrative cinema and appreciate moving family stories set against a grandiose natural backdrop, you should definitely not miss Mahana - A Maori Saga. Absolutely worth seeing

Cinema trailer for the movie "Mahana - A Maori Saga (Neuseeland 2016)"
Loading the player ...