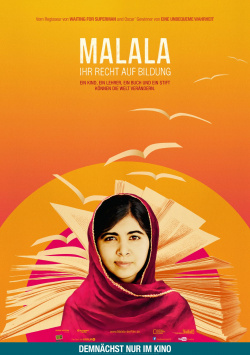 Malala - Her Right to Education

In the fall of 2012, Malala Yousafzai, then 15 years old, was attacked and gunned down by an armed Taliban brigade along with two friends. It was not a random attack. The girl was a thorn in the side of the Taliban for her statements about the importance of school education for women, which she had been making known since 2009 in an anonymous blog for the BBC. But the shooting did not kill the girl. Seriously injured, she was saved by extensive surgery. Since then she has raised her voice all the louder and soon became the youngest ever Nobel Peace Prize winner. This story was the stuff Hollywood dreams are made of. So the initial plan was to retell Malala's story as a feature film. But it quickly became clear that there was only one person who could tell it in a truly believable way, and that was Malala herself. And so multi-award-winning documentary filmmaker Davis Guggenheim was commissioned to make a documentary about the courageous girl.

18 months Guggenheim and his team spent with Malala and her family. Together they travelled through the UK, Nigeria, Kenya, Abu Dabhi, Jordan and the US. The result is Malala - Her Right to Education, a documentary that on the one hand illustrates the girl's courage and charisma, but at the same time is structured in a somewhat overcomplicated way and thus loses some of its emotional power. Guggenheim provides answers to all the questions the viewer might ask. He succeeds in doing so by means of animated sequences, interviews, TV excerpts and very everyday snapshots. All of this is thoroughly engaging and involving. But the way in which Guggenheim puts the individual moments together sometimes feels a little arbitrary and unnecessarily convoluted.

It can then sometimes happen that scenes follow one another, which in themselves have nothing to do with each other. A coherent narrative flow just doesn't want to develop, especially since there's no obvious reason for this non-linear narrative. This is a shame in that the story the film tells and the message behind it is very important and should reach and touch as wide an audience as possible. But what Guggenheim still managed to do very well in An Inconvenient Truth - namely to convey important messages in an entertaining way - doesn't quite work here. The emotional moments seem downright manipulative because they don't arise from the straightforward structure of the narrative. And that, unfortunately, is rather counterproductive to the message that Malala almost paid for with her life.

Nevertheless, Malala - Her Right to Education is an important work worth watching and should become a must-see for all schools. A film that in its own way impressively shows that education is something that cannot be taken for granted and is worth fighting for. A plea against hate, oppression and fear and therefore despite its weaknesses: Absolutely worth seeing!

Cinema trailer for the movie "Malala - Her Right to Education (USA 2015)"
Loading the player ...