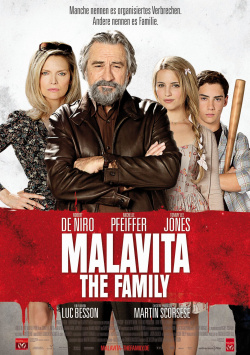 Once upon a time, people fled from him. But now Fred (Robert De Niro) is on the run himself. For the one-time Godfather of New York's testimony has put some powerful gangsters behind bars and earned the hatred of quite a few mobsters. To escape certain assassination attempts, Fred has gone into hiding with his wife Maggi (Michelle Pfeiffer) and their two children Belle (Dianna Agron) and Warren (John D`Leo) in the FBI's witness protection program. But the family can never comply for long with the orders of their assigned agent Stansfield (Tommy Lee Jones), so they have to constantly change their identity and location. A small village in France is to become the new and hopefully permanent home of Fred and his loved ones. But a godfather from New York in the French countryside? That can't go well for long, of course, which is why it's only a matter of time before the Mafia gets on their trail here.

When cult director Luc Besson teams up with Martin Scorsese as producer and Robert De Niro as lead actor to tell a blackly humorous comedy set in the Mafia milieu, the result can't help but be quite a delight. And when Tommy Lee Jones and Michelle Pfeiffer are also in front of the camera in the adaptation of a novel by bestselling author Tonio Benacquista, nothing can really go wrong. Or can it?

Malavita - The Family is proof that big names and lots of talent are not enough to guarantee a good movie. No question, there are many scenes where the mafia comedy is a lot of fun. How Maggi reacts to the arrogance of a French supermarket salesman, for example, or how Fred campaigns for clean water in his house, is hugely entertaining. And Tommy Lee Jones' increasingly desperate facial expressions in a scene where Fred tells his French neighbors more about the American mafia at a movie night are simply wonderful.

But unfortunately, standout moments are in short supply throughout the nearly two-hour running time. Instead, rather inconsequential action dominates the film. This is neither due to the actors, nor necessarily to the script, but primarily to Besson's staging, which simply lacks the necessary timing. As well as Besson has executed the lead-filled finale, the more quiet or humorous scenes come across as rather listlessly and powerlessly executed. As hard as De Niro, Pfeiffer and their young co-stars Dianna Agron (Glee) and John D`Leo try to get some momentum going, they are consistently thwarted by Besson's direction. There is very little of the genius he once displayed in Leon - The Professional or The Fifth Element here.

Malavita - The Family is not a bad film, there are just too many successful aspects for that. But a work that combines such great talents in front of and behind the camera should have simply been better than nice. If you're just looking for two hours of entertaining, but also quite inconsequential entertainment, you really can't go wrong with this comedy. But if you have high expectations when you read names like Luc Besson, Robert De Niro or Martin Scorsese, you will be disappointed after a few minutes. And that's why in the end it's only enough for a: worth seeing with clear cutbacks!

Cinema trailer for the movie "Malavita - The Family (Frankreich /USA 2013)"
Loading the player ...